That's what they call one of these things, anyway.. I'm most of the way through a book called "The Four Season Harvest" by Elliot Coleman.. husband of Barbara Damrosch, author of "The Garden Primer" one of my favorite gardening books. Pretty good husband/wife team, right there. Both books recommended to me by a pal of mine, who is also a bit of a cold season farmer himself (Hi Kevin!). I had initially set out ot build a cold frame, with raised sides and flat glass 'lights' to let the sunshine in, but after reading this book, and perusing some other sources, I've decided to go with what the call a 'Low Hoop House'. Think big, full size plastic covered greenhouse all shrunk down to about 2-3' tall and you've got the idea. Technically, I think a greenhouse you can walk into is called a High Hop House, and one you can't fit into is called a Low Hoop House. So, that's what I've got.

The idea is to provide a bit of protection from the elements, and raise the temp's inside a bit to keep things from totally freezing solid and getting ruined. Or, if things *do* get frozen, during the day the sun can warm 'em back up and the ice/whatnot melts off, and you harvest stuff in the late morning or afternoon times. There's a couple of key things with these buggers to keep in mind.. one is that there's different kinds of vegetables, some like it hot, some like it in-between temperature wise and some actually prefer it downright cold. The key for the  growing season in the fall and the subsequent winter harvest is simply to grow the right kinds of vegetables. Mostly this is gonna consist of things like leafy greens and other stuff, like carrots, which would also apply. The best of the bunch is stuff called Mache, the Chards, spinach, Brussels sprouts.. etc. The next key thing to keep in mind is that really *none* of these things actually grow in the cold.. they just don't get kicked to the curb, stomped on and destroyed when the temperatures dip into the 20's and 30's. They *survive*. They thaw. They manage to carry on. So, you gotta grow 'em when it's still fairly nice out (it's key lettuce, radish, chard season right now! I blew it on Brussels' sprouts, though..) and then protect 'em with some sort of covering, like a cold frame, a low hoop house, or a full-size greenhouse, if you're that fortunate. This post will just document the on-the-cheap build of my low hoop house. When I say cheap, I'm literally talking $20.14 out the door, with  some parts left over that I didn't even use. You could probably make this thing for $16 and change. And hell, it might just collapse with the first snow or violent wind.. but if it keeps my lettuce alive for 3 more weeks than it would have otherwise, who's better than me? Plus, in the spring, it'll help harden off the tomatoes and peppers and such, and let me start growing more cold tolerant things in Feb or March. And that's what I'm talking about. Check it:

Start with this stuff.. three or so 2x4's (which will eventually be ripped to 2x2 dimension..) or buy  few more 2x2's already cut. 2x4's are about the same price as 2x2's, so when you rip 'em down the middle, it's like a two for one special. A small bag of plastic pipe hangers (in the plastic bag there..) and a couple of PVC crosses, some PVC T's and I used four 10 foot lengths of PVC pipe, which we eventually cut a few feet of the bottom of to get the arch's just right. 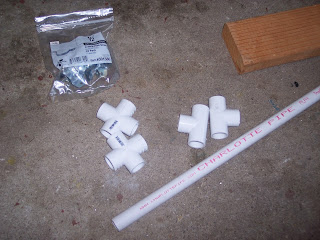 Then use a Dremel tool or a big drill bit to hog out the insides of the PVC T's and crosses in the right places so that the PVC pipe can slide through them. The pic shows the inside of one bored out, and the other one slid up onto the PVC pipe.. You'll see how this slides together in a minute.. 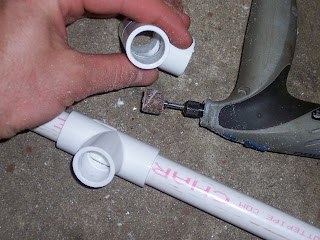 Next, build yourself a wooden frame from the 2x2's that'll fit nicely over top of your raised (or un-raised, I suppose..) bed.. 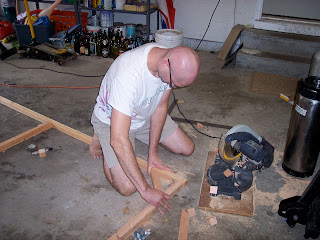 ..use the pipe hangers to trap the ends of the pipes onto the frames.. 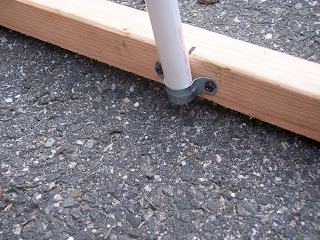 until you have something resembling this: 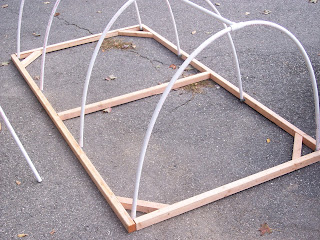 This could be a total piece of crap, keep in mind. My testing will either confirm or disprove that statement.

When you're done, drag it down and test fit the thing over top of your bed/beds. It should look something like this does: 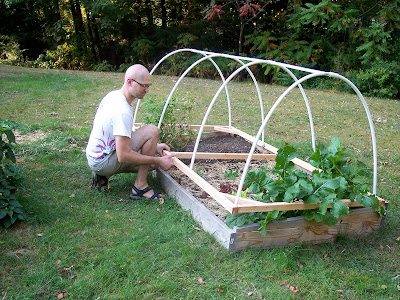 Since I have a lip of 2x6 that's raised up a bit that runs the whole length of the back side of my bed here, I sorta use that as a hinge.. it's not a hinge, but it keeps the frame from calling off the bed in the back and allows me to easily tilt the frame up. If your borders are all even around the edges, you might wanna put a couple of hinges there to make it easy to tilt up and get into your beds.

Now, later on next month when it starts to get cold, I'll bring out some clear or translucent plastic and cover the thing, stapling it in place along the edge. You can lift up the whole frame like I'm doing in this pic to reach in and grab stuff from inside, and then drop it back down when you're finished. If it's warm in the day, you're gonna have to prop the cover up so as not to bake the veggies inside there.. supposedly, these things can boost the temps inside 10-15 degrees. Imagine if you've got a nice75 degree fall day,sunny out, and the temp inside there goes up to 85-90 degrees F, and you've got instant ruined produce.