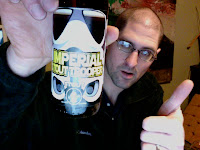 Ah, drats. Forgot to Left justify that pic. Too late! Anyhow, because I'm still sad to have lost my dog earlier today, I went totally crazy and did a couple funny things.

First, I brewed a beer in her honor. Using the yeast I cultured up from the Jolly Pumpkin 'Oro de Calabaza' bottle, I whipped up a fairly simple Belgian inspired pale ale that I'll sour with the Jolly yeast. I call this beer 'Oro de Maggie', which I think means "Golden Maggie" or "Maggie of Gold" or something similar. Maggie was generally made of stink, feces and laziness, but "Maggie of Gold" is a more approachable name for a beer. You know, something you'd maybe *like* to drink. The beer is made up of 80% two row pale malt, 20% Wheat malt for the base, and 1/2 lb of Crystal 20L for a little flavor and gold color. I also beat a lb of cane sugar into the mix to bring up the strength without affecting the color and to assist in drying out the beer as well. I wanted a really pale, not sweet brew to let the sourness shine, if and when it comes around. the hops are just an ounce of Perle at 7.6% AA for an hour, nothing more.

is about the best I can do right now till we find our normal camera. I took this one with the video camera, and that ain't got a flash on it. I lit it up a bit with a flashlight to get this crappy shot! But, you know, mysterious is good. Builds the suspense up, see?

The other funny thing I did was to open up that there bottle of New England Brewing 's "Imperial Stout Trooper" Imperial Stout. I was trying to save this for a special occasion in the far future, but man.. my ol' dog needs a salute, and this beer is supposed to be worth it. Rated at something like 10.5% abv, it's fairly hefty. The price tag is too, as it's the single most expensive beer I've ever bought. $9.00 a 12oz bottle. Snap! Even Dogfish 120 minute is still a bit under that, and that brew packs a twice as powerful punch. Anyway, in drinking this beer, I get.. and I know this is strange.. but I get a sense of bacon. No, seriously. The aftertaste I get in the finish here, is of bacon. I know it has something to do with the roast malts and the residual sweetness and whatever I also taste here, but it's still a funny thing to have in a beer. Otherwise, the beer pours a wicked black color, insanely thick appearing.

It's not bottle conditioned either, so no yeast falls out at the end. The carbonation is fairly low, and there's little head on the beer (light brown in color) in the glass, which in my case is a 22oz Dogfish Head snifter, my favorite glass. There's a serious bitterness to balance all this malt out, but not over the top. Definitely even keel here. This is a good beer, here. About halfway through it now... but I've got some big Stouts downstairs on the shelf that I brewed with my boy Pete W. that are just as good, I think. Of course, you have to age the damn things for several years to get 'em just right... 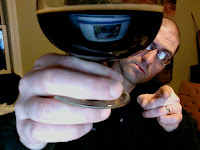 I think that's all for now. Don't forget, keep on clickin' that stinkin' Google ad at the bottom there to bring in the money!
Posted by Mike E. at 9:27 PM 3 comments: Links to this post 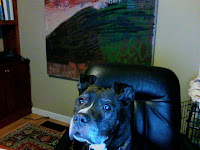 Her last statement to the world was to crap on the vet's lobby floor in spite. Good girl. That'll teach 'em.
Posted by Mike E. at 12:46 PM 2 comments: Links to this post

Somethin' growin' in there...

Well, I'd surely take a picture of the thing and post it here, but the wife up and lost the camera, so you'll have to stay in suspense while we try to find the thing. I'm referring, of course, to the yeast experiment we (Frank and I) cultured up from the Jolly Pumpkin 'Oro de Calabaza' that we sampled in the last post. The half gallon starter seems to be up and running well now, and the smell emanating from within is totally awesome. Perhaps I'll whip something up tomorrow to throw that crazy mixture into to see what we can get... stay tuned, true believers!
Posted by Mike E. at 10:43 PM No comments: Links to this post 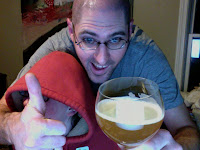 So that's one of the glasses of Oro de Calabaza from Jolly Pumpkin brewery that I opened up (750mL bottle) and shared with neighbor Frank. They told us no pint glasses, should be a tulip.. but since I didn't have any of those, we opted for a red wine glass to work with. Not ideal.. but it'll do. This is technically a wild yeast/bug beer, but it's very approachable.. no real kick in the teeth sourness here. Noticeable, but not over the top. A real nice barnyard character as well. The bubbles were so extremely fine as to be in a class of their own. I've never run into a beer so finely carbonated like this that it actually felt like you were drinking a mousse or a whipped cream! Amazing stuff. The flavor was great right out of the bottle, but as the beer warmed up, it got even more pronounced. I'd suggest leaving this one on the counter a it before opening it up... let it breath for a bit. A really light, well.. golden/straw color fabulous to look at will be very clear, unless you flub the landing and slide some of the yeast from the bottle conditioning into your glass. Highly recommended, I'd suggest it with dinner instead of a white wine for a change.

Next up was a whole growler of Thomas Hooker brewery Nor'Easter, as supplied by our friend Timmay. No photo for this one, as we were in the midst of trying to culture the yeast/bacteria from the bottle of Calabaza at this point and got distracted... but a really nice beer. Went down pretty easy, and by the time we were finished with this whole damn thing, we were ready for.. 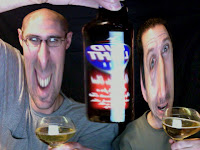 Bud Light! Yup. We even drank it! It was left here from the New Years party, and by the end of that growler, we were ready for anything! So, we drank it from wine glasses as well! Looked weakly yellow, was fizzy, and tasted like a lightly sugary mess with no detectable hops. Just what we were expecting, I guess. In either case, it was still a good night. I'm not sure the yeast culturing experiment is going to work out or not... the half growler of wort I've got the sample in from the bottom of the bottle isn't looking so happy.. but we'll see what some time brings. Stay tuned!