..and we're gonna give Timmay the win for that one. He was over last night and pretty much dealt the death blow on the Roggen. 5 pints at the very end of it's life and she was clear as a bell and tasting the finest. Really nice there, and then [poof!] 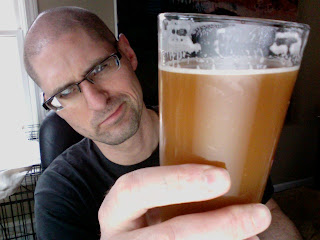 ..is still really cloudy, but I don't see any real huge particles in it. I wonder if it's gonna clear up, or stay this orangy-ish color. I've had a bit of what looks like a haze in some o my rye beers in the past, and, although this only has a single pound of rye in it, I wonder how that'll affect things. In a positive note, it's got carbonation the lies of which usually take WEEKS to settle in. So tight carb-bubble wise, it's crazy. Still tastes yeasty, but I've got a pretty good bitterness in the background, and a touch of flavor from the hops too. There's a big malt hit in the middle, and the rye, again, at just one pound, is coming through like a train. Rye is some crazy stuff.. big, big flavor impact from that grain.

In other news, here's a shot of the framework (or, some of it..) of the chicken coop I'm building here.. I spent hours on this yesterday, and some more hours today too already, and this is where I'm at so far: 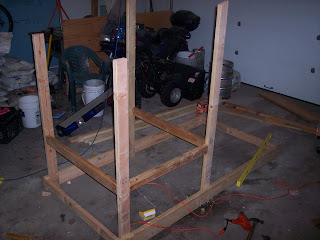 Well, I'm off to put in the floor of the thing now. Went out and actually bought my first power tool today! Jigsaw. Yep. Power tool. Yay me.
Posted by Mike E. at 4:20 PM No comments: Links to this post