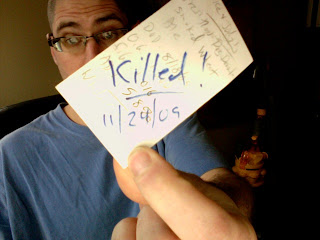 Sad day, indeed. The Apple Smoked Wheat beer I brewed with Jody has been annihilated. That was a truly good beer. It has since been replaced with the IPA I made with Frank a few weeks ago. And yeah, I'm gonna call it an IPA.. I was thinking about demoting it to Pale Ale, cause it finished a bit high when I measured it last, but when I plugged it into the kegger, the thing had apparently dropped a few more points, carbed itself, and upped it's abv% just enough to properly squeak into IPA territory. Besides, it's got that Dogfish 90 Minute viscosity where it just doesn't feel like a Pale Ale anymore. It's quite good, and it's hopped entirely with Northern Brewer, so if you wanna know what that particular hop tastes like, this is a pretty good way to get that done.

I also tasted a bottle of this over the weekend: 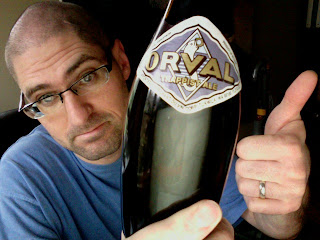 ..and it was good. The rumors are true, this is fermented with quite a bit of Brett in it, and it shows clearly. This was a hugely carbonated beer, and was pretty darned good.. if you like Brettanomyces. If not, I'd pass. If I wasn't going for just a straight sour beer in that fermenter downstairs, I'd have pitched these dregs right into it.. just because it's a fine strain and seemed like a good idea. But, my sour side won out, and I refrained. Hopefully, that thing sours right up..

Also, two days ago, our chickens had their first 5 eggs layed day. Evey chicken I have fired one out. Heck, I didn't even know they were all capable, let alone able to synchronize the operation! And here I thought I still had two lame-o's in the flock. Yesterday, we had 4 and we would have had four again today, but one broke in the nest box.. one of the new girls is still in the early 'soft shell' stages of gearing up.. too bad.

Otherwise, Turkey Day came and went yesterday as well, and that was a fine time.. my sourdough project was miserable and inedible, but I'm learning still. I'm trying to fire up some sourdough Kaiser rolls right now, but I'm not that optimistic. The dough just doesn't feel right for this..

The kombucha project is still going downstairs, but it's slow going.. we'll have some status updates on that when it get's more interesting. There's a little film on the surface, but not enough to take a picture of.

So! Here we are again. I had a bit of a setback with the sourdough thing, but then quickly realized my error and figured it all out. I had an "epiphany moment" as it were. When doing these starters, the mix at first is rather gooey, wet, and liquidy.. bbut after the wild bgs have found their way in and settled down with you, you really need to thicken up the mix. The easiest way to do it is with a scale. Simply weight the amount of goop you have into a glass bowl zeroed out on your scale, take half of that weight in water, and  the same amount in weight of flour, mix it up well with the starter, and put it back in the jar to grow again. It will double in size, ready for the next feeding. Here's my current sourdough sponge: 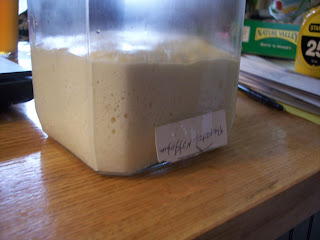 For instance, here's the math in an example. you start out with some small amount of starter you've grown in the fridge.. like, say, 25 grams. Take that, mix it well with 12.5 grams (ok, approximately, let's not get carried way here..) of water and 12.5 grams of four. Mix, and set aside in a warm spot. It'll double in size if all goes well, and will be a 50 gram mass by the next 12 hours. When growing starters, feed every 12 hours or so.. you want to feed the starter when it's at its peak of activity, not before, and not after it begins to collapse. So, 12 hours later you'll take your 50 gram mass of starter, throw it in a bowl, and measure out 25 grams of water and 25 grams of flour, whisk well (introduce lots of air, the wild stuff and souring components in there love this stuff!) and put back in the loosely covered jar. 12 hours later, you should have 100 grams of starter, that has doubled in size. Keep doing this until you have as much starter for your recipe and you're done. Remember to set aside a small amount for your next recipe, that you'll feed as normal and then stash in the fridge.. which will retard its growth significantly, and allow feedings of only once a week or so.
Yesterdy, after growing a starter up all day, I did a mixed yeast beast of part sour sponge and part cultured bread yeast. I made this gorgeous loaf: 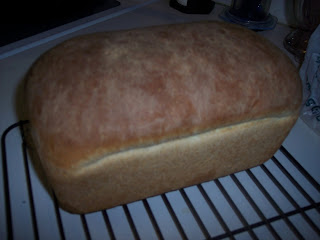 I also made some rolls for Thanksgving dinner.. check 'em out. They're Oat grain topped whole wheat 10 grain rolls. Oh, snap! Oh, wait.. I forgot to take a pic of the baked versions.. these are the pre-baked rolls. Ah, nuts.. 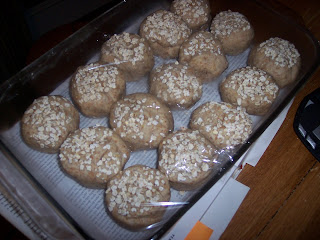 Here's me working the magic on the big sourdough project made from the starter sponge in the above-mentioned pictures later that day.. This stuff is LOOSE. Very flexible, elastic.. sorta sticky, but this is what the dough requires to rise properly. 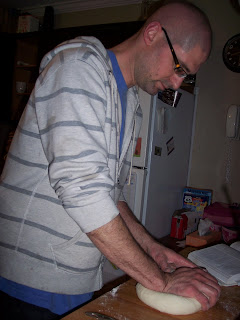 And here's the finished dough, waiting to rise in the bowl overnight.. I wanted a slow rise, so I stashed it out on the work bench in the garage where it's only 46 degrees, to slow down the rise. I mixed this up at 2030 hours and managed to stay awake till 2230 hours, but then got tired.. a warm rise would have taken 4-6 hours, putting me at the oven baking this thing at some time around 0230 hours in the morning.. I wasn't interested in that, so I put the chill on the dough to slow it down. It worked like a charm, and was only slightly risen in the morning at 0830. Now, it's back out in the warm room and just about doubled up.. more on that in a later post. 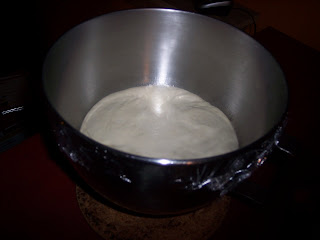 OK, got some stf to work on.. here's a closing shot of my dog, Barbie. Just for comic relief. 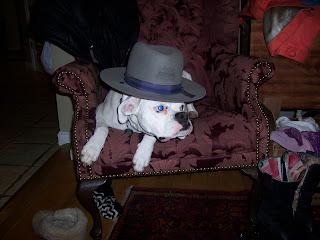 Posted by Mike E. at 9:55 AM No comments: Links to this post