I am seeing a total ammount of nothing from the Habanero seeds I put into the propagator back on the 14th of February.. I know these can take some time, and of the six I put in of the first batch, I got only one.. but really, I put like eighteen seeds in this prop, and I got nothing showing right now. That's sorta sad. On the bright side, I have half of the Hot Cherries sprouting now in a cup with a damp paper towel under the lights, so I figured I'd toss the rest of my Habanero seeds into the same situation because it's looking pretty bleak otherwise. Nothing going on in the newly seeded props, but those are really brand new so far, so I'm not stressed about those yet.. check a pic of the germination cups right now though:
In other news, I just took my digital thermo outside and put it on the edge of the hoop house, on the outside of the house. Here's a pic of that and the temp outside right now: 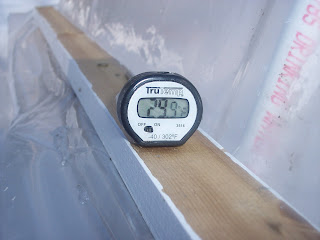 And a few hours later, I took a pick of the same thermo, that I had put inside the hoop house propped up on a cup to keep it up off the snow. Check it out: 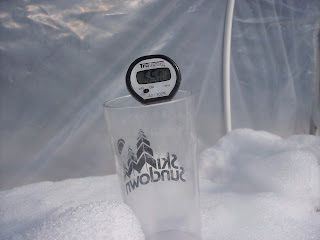 And there it is, 55 degrees. Considerably warmer in the house than it is outside.. I'm surprised the snow isn't melting faster, for sure, though.

Oh, also found out.. the Jalapeno's I have are the Early variety, supposedly ready to roll in like 75-85 days. I've already took a chunk of that up already.. two months they've been in here!

Otherwise.. everything else is status quo. Stand by for further info..
Posted by Mike E. at 2:58 PM No comments: Links to this post

This is the competitor: 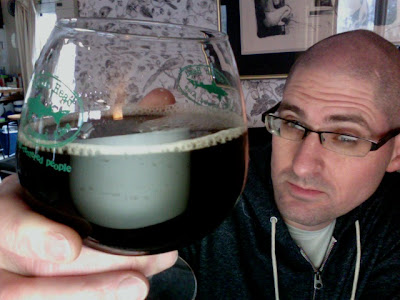 Hard to tell from the photo alone, but that's a Northern English Brown, so says Savvas.. let's see about that.  ;)

Appearance: Initial appearance shows a dark brown liquid that canot be seen through at normal room lighting conditions. When jacklighted with my trusty maglight, it shows a crystal clear mahogany color thats awesome to see. Style guide wants to see dark amber to red/brown, so I'll give him that. Dinged only for no real head appearance on this beer. 2/3

Aroma: I'm getting an initial sweet caramel thing here, but in the background a high pitched sorta hoppy thing comes through. It's fleeting and get's squashed by the sweetness pretty quick, but its there. That's pretty much the definition of the NEB, so.. hey, good for you. On second glance, I'm sensing almost a microscopic roast note in here, too.. appealing. However, for style, I think it's a little heavy on the caramel and esters are readily apparent, where for style they are allowed, but should be restrained. But still, it's darned tasty..  8/12

Flavor: says hops. Mild, but apparent. A bit of a tangy flavor in here.. from the hops, nothing bad. Beer is a bit too cold right now, gotta rest this a bit and let it warm up.. I'll come back in a sec. After a sec: ah, yes! Quite fine. Nice beer. Seems to hit a lot of the right notes for this style.. I'm liking it. 16/20

Mouthfeel: I'll go medium body for this beer. It's pretty smack in the middle of 'just right'. I'm thinking it's a bit on the light side of carbonation, but I was warned about that ahead of time. Still, nothing wrong with where it's at.. could just stand a pinch more is all. Maybe that's just the high carbed American in me talking, though.. and holy crap, but am I sensing diacetyl here, or is that just me?? 3/5

Overall Impression: They say 'nutty' is the characteristic you're looking for in this beer.. I still get a more deep sweet, caramel thing here than nutty. It's still quite fine, but the nutty party is missing.. which is saying a lot, considering how nutty the brewer is. Oh snap! Still, I'll go so far as to give an 7/10 here.

That's only a 36 out of a possible 50 points, but man.. the whole seems greater than the sum of the components. I really wanna go back and re-figure the numbers to push this a bit higher, but I'm not sure that's the right thing to do. I wanna see this beer a bit less caramel-ly and a scosche more nutty, whatever that means. For a brown ale, I'm thinking it should have a bit more brown in it, rather than Red beer, you know what I'm sayin'? But I'm not an Englishman, and I guess my score will hve to stand, although I feel it should be more of a 38 than a 36. What a bastard!
Posted by Mike E. at 5:09 PM No comments: Links to this post

Put some stuff in the props for *real*, yo..

Got some peppers in the propagators now for real.. no fooling around this time! My original test subject Jalapenos are geting way too big to fit under the lights now, along with the rest of the tiny baby plants. I'm not sure what I'm going to do with those buggers.. except my sole habanero.. that's still growing, but very slowly. Here's a pic of the setup now: 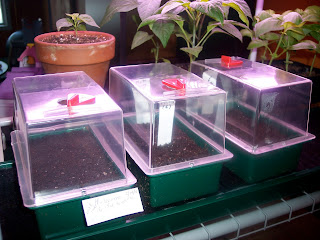 Today, I put in some extra Hot Cherry peppers, because I have so many of them and the ones on te paper towel experiment haven't done anything yet.. I also put in the *real* Jalapenos that I'll be putting out this year, the flat of Habaneros haven't popped yet, but I remember the other ones I tested on took almost 20 days to sprout, and so far isn't only been like 13 days for these ones.. and, most exciting, I put in the Fatalii seeds (well, six..) that I got with Jody at the Garden show in Hartford the other day.

I think I failed to mention that.. me and Commando Jody hit up the Hartford Gaden and Flower show the other day at the big civic center place.. it was mostly garbage and flea market crap, but there were some cool things. I forgot to bring my camera, but had I remembered, I would have taken some pics of this totally awesome self temperature regulating greenhouse thing that was on sale there. $4,200 if I remember right.. so, not cheap, but damn, it was cool. Otherwise, the only thing we walked out with was a single pack of 25 Fatalii pepper seeds that we split up between us. Fatalii's are supposed to be slightly less hot than Habaneros, but not by much. They're supposed to also have a fairly nice fruity, citrus flavor to them too, just before they knock your teeth out with heat.

Otherwise, I got nothing else. So get out of here..
Posted by Mike E. at 1:40 PM No comments: Links to this post