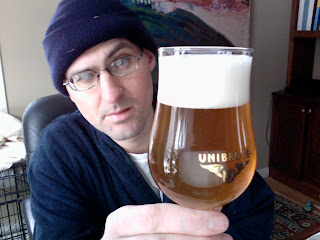 So this is my new favorite glass. Well, it's sorta tied with my old favorite glass, a Dogfish 22oz snifter.. and that's a tough one to beat. But man, I've been dying for a tulip for a while now and I'll be darned if I don't just love it. Makes for a fantastic presentation, too.

I just came into the house from the cold garage, so you can leave your comments about my hat at home. I was out there roasting up an old Guatemala from (are you sitting down?) what look like October of 2007, according to my documentation here. And that's just the date *I* received it. Who knows what crop this actually was.. Thing is, I had it vacuum packed and freezer-ed for the better part of the last year, so we'll see what it tastes like tomorrow or the next day. I'll keep ya's posted, of course. Naturally, I had this set of beans roasted to my satisfaction in my own damn garage! Check the past vid tutorial for details, eh?

The ferment of the Jolly Pumpkin yeasted beer, the "Oro de Maggie" as it's now known, is STILL going full blast. I've never seen anything like this. 2030 hours tonight will be a 7 day fermentation, but that includes the 1.5 day lag time.

OK, that's all. Click the Google mad-money links, kiddies! Thanks.
Posted by Mike E. at 12:19 PM No comments: Links to this post

Update on a few things.. 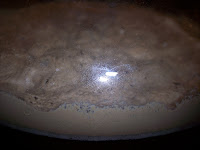 So this is a poor pic of the Jolly Pumpkin yeast I hijacked from their bottle... I've never seen a ferment quite like it before. It's a really thick chunk of yeast. Super dense, and about 3/4 of an inch thick. Sort like an off colored dollop of sour cream floating on there. The activity in the 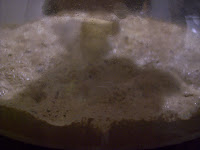 wort itself is very active, but has been going on now for about four days. the temp has ramped up inside the bottle from 65-ish degrees when I pitched this, to just a hair over 67 degrees now. The smell is still of that really floral sort of Mead smell. There's also a hint of a sour smell under there, but I recognise that from the intense sour note the yeast had when I pitched the dregs from the original bottle in. This new beer hasn't had a chance to star souring yet. No word back yet from Jolly Pumpkin personell regarding the questions I posed to them on this stuff.
As far as that glass of wort I had on top of the fridge.. I came home last night to find it had taken off, fermented, and crashed, all in one shot. *something* got in there and had a wild party and the stuff now smelled like a glass full of garbage. It got tossed this morning. But hey, that's like almost 5 days of infection free wort. My sanitation procedures must be good enough, I suppose. Hell, I didn't even sanitize that glass, come to think  of it. ;-)
Posted by Mike E. at 11:08 AM No comments: Links to this post 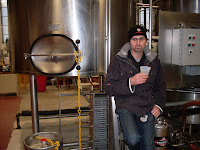 So me and Timmay took a trip to the Thomas Hooker brewery yesterday to sample the wares again.. a seemingly frequent but always enjoyable event. On tap this time was the Munich, IPA, Pale Ale and Blonde. Their Munich was spot ON this time around, and was very tasty. The IPA also held it's own quite well. The Blonde wasn't as nice as I normally remember it.. but wasn't bad by any means. Jay the brewer mentioned that product cycles sometimes play a role in how things taste at any given time, and he agreed the Munich was really sweet now. This photo, btw, was taken on the steps to the brewery stuff, while I still had a mouthful of beer. Nice job, Tim! And yeah, that's a plastic cup. 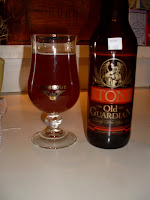 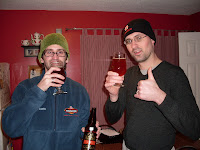 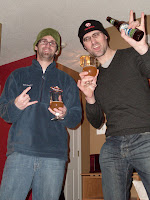 So Tim decided to get completely crazy and subsequently broke out a 12 oz'er of Southampton Publik House Double White Belgian style stuff. I was not at my best tasting and reviewing form at this point, but I'll mention that this beer had a CRAZY fat Vanilla, Banana TAPIOCA PUDDING aroma to it that was just not real. Tapioca pudding? Seriously? Weird. And delicious.

It was a full day, and good times were had. In other news, the beer I made from the Oro de Calabaza yeast is doing very well now. A lag time of about a day and a half.. I might have underpitched. It's going good now, and the glass of wort I put aside on top of the fridge to sort of check my sanitation process is STILL in perfect un-funky condition. Three and some such days later and it's still good? Nice! I'd take a picture, but we still haven't found the camera.. The starter for this beer, as well as the whole batch now, smells distinctly of Mead. Really interesting! You'd swear it had a truckload of honey in this thing, where it actually has none, if you went only on smell. I'm gonna touch base with the brewery in a few minutes and see if this is a normal characteristic of their yeast.

I also move the Google AdSense banner up to the right corner of the page now. Keep clicking! Later..
Posted by Mike E. at 10:25 AM No comments: Links to this post