So there was a bit of a frost last night. Took some pics of the bed with the hoops on it to show, and also an update on the Garlic planting that I did the other day. Check the garlic first: 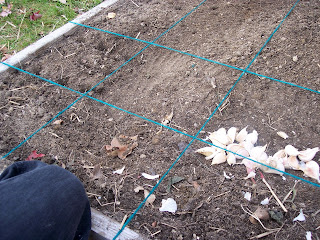 Otherwise, here's some pics of the interior of the hoop house I mentioned above after the frost last night. Clearly, the basil didn't like this frost idea at all, and it's totally expired now. But everything else looks OK. Check it out.. 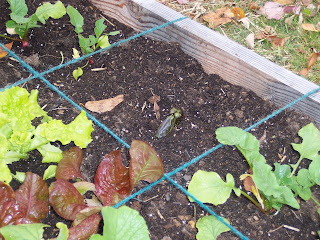 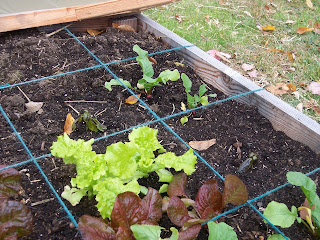 So, the experiment continues, minus the basil. That basil was a bit more fragile that I had anticipated. I thought for sure that, under the hoops, it would get past a minor frost like this one.. I think we only just barely touched 32-ish.. not a deep freeze by any means. Live and learn. Maybe if I'd had some thicker plastic it would have done better, but too late to find out now. ;) Next year..
Posted by Mike E. at 12:04 PM No comments: Links to this post

Me and Timmay whipped up a single hop IPA the other day (code named 'Quebec'!) all IBU'd up with just 12.3% AA Citra hops for the duration. Here's a couple of pics of the operation in action, including a mash paddle solo by Tim, the throttling of the growler of yeast to give up the goods and the finished product in the bottle, pre-ferment. Check it:

In other news, I did some work prepping the upper bed for the overwinter/garlic planting. Here's the upper bed, all llama manured up with two 10 gallon buckets worth of manure spread over the top. I spread the manure for the obvious reasons.. good, well processed organic material, with a small amount of all the right vitamins and minerals. But I also added a couple other things, including Greensand and Bone Meal. The greensand is a sandstone, which is mainly used as a soil conditioner. It helps soils with too much clay loosen up and, conversely, helps soils with too much sand stick together a bit better, so as not to be totally limp-wristed when you go to work in it. It also has trace amounts of some minerals, mostly potassium. Since the upper bed I planted used a lot of topsoil, instead of the soil-less mix I used in the lower bed, this stuff I hope will come in handy to make this stuff a little bit nicer to work with. It got a touch compacted this past year. I also added the Bone Meal as well, for the phosphorus it contains. I get most of the Nitrogen in the beds from direct application of fish emulsion, so I didn't add anything with nitrogen to the beds. Hopefully, next year wil be fantastic in comparison this this time around, with all this prep work I'm doing now. Supposedly, the overwintering of the beds with the manure and supplements is one of the best things you can do to the joint.. if you try this in the spring, the stuff hasn't broken down and added what it's could have added in that short amount of time. The compost will probably overwinter in the composter and be added in the spring as a top dressing, I'm thinking. We'll cross that bridge later.

Here's some pics of what it looks like now.. 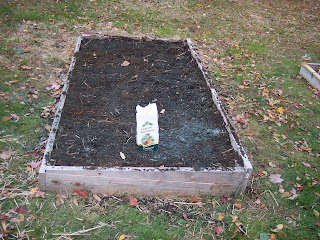 In other news, the hoop house is still intact and functioning well. I lost a piece of tape on one of the ends,  so far, but still working well just the same. On an average 50's -ish temp day, if you stick your hand under the plastic, you can easily feel that it's 10-15 degrees warmer, and more moist inside than it is outside. I've also re-evaluated my plan with this thing and now I'm just looking to see how long I can get the plants that are in it to live into the cold months, through various degrees of frosts. The reason being, if next year I plant a bunch of lettuce and broccoli and spinach and I know the cold frame will extend the harvest up until the middle or end of November, or maybe into December, then I know I pretty much need to eat up everything inside it by that time. So, I've got a few lettuce and other things still around in there that I would really like to eat now, but I think in the name of science, I'll leave them be until I see how long they'll last inside the hoops. They sure look delicious right now, though.. hmm..

Stay tuned for the garlic bulb planting episode coming up..
Posted by Mike E. at 10:49 AM No comments: Links to this post