Unfortunately, I've got no pictures of this event, but I brewed with Jody yesterday, and we brewed the blandly named "Classic Pale Ale" from a recipe in BYO mag. No disasters occurred during the day, so I had no reason to change the name from "Classic Pale Ale". As you all may or may not know, my beers are generally named from some sort of bad thing, or disaster, that occurs during the brew session. So, I guess maybe a bland name is a good thing after all? Hmm.. keep that in mind while making your beer selection here next time, eh? ;-)

Anyway, she's fermenting nicely downstairs now. It's mostly 2 row pale ale malt, a 1/2lb of 20L crystal, and a 1/2lb of Caravienna. 1.050 O.G. in the end run, hopped with Columbus and Galena at 60, Centennial at 15 and Cascades at 5. There should be some dry hops in here, which I think I will do at the end of primary after the action subsides inside the glass bottle.

We tasted the Oro de Maggie that was in the spare 1/2 gallon bottle next to the real deal, and what had been a wonderful beer last time I tried it, really tasted quite mean this time around. I hope the big bottle is OK. The small one has been goofed with quite a bit, so I know it's really not the same beer as in the other carboy.. but still.. it makes me nervous.

In coffee news, I'm drinking possibly one of the nicest coffees I've ever had, courtesy of Kevin from NY. He brought me two to play with last time he was up and this one, the Organic Ethiopian DP Bonko "Black Sun" is just not of this world. It's a "blueberry-esque" Ethiopian like you might have had before, but this cup has it all! A wicked good mix of the berry notes, acidity, body, etc. It's *awesome*.

Uncle Jack is coming over tonight and we're going to be cracking open up the only bottle of Oro de Maggie that has ever been capped.. we'll see if that's any good tonight and go from there. He's also indicated that he's going to bring something else special up for a test as well.. but we'll see when that gets here. Stay tuned, true believers! And don't forget, click that Google link before you split..
Posted by Mike E. at 9:46 AM No comments: Links to this post

A new Kettle idea.. and some guts. 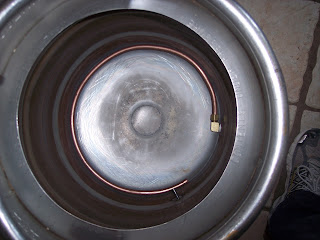 What you're looking at is my new idea for siphoning out of my boil kettle. We're sort of going backwards to simplicity here from the more complex that way it was before. The old design, which I don't have a picture of, was a down tube ending in a "T" connector that went into a circular ring shape that sort of encircled the divot at the bottom of the pot. On the bottom of the ring was a lot of hacksaw slots. That was used to filter the hop material out. That worked great when only whole hops were used, but I'm finding
whole hops hard to come by, and pellets much more convenient to use. Problem is, pellet hops clogged that ring-thing up in a heartbeat. Complete blockage, and no flow. So, I screwed with a weird "U" shaped thing for a while that just was a straight through tube with no straining mechanism on it at all, but picked up wort from the side of the kettle, right about where the end of this current tube is now. That worked great for pellet hops, but kind of jacked up the immersion chiller a bit because the two devices interfered with each other. Also, the straight tube got totally plugged once or twice by a simple hop cone getting jammed right in the end of it. 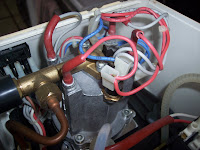 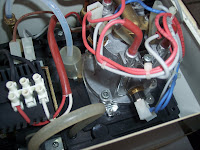 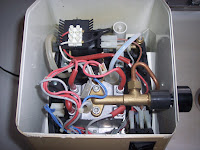