Man, the card reader got lost somewhere along the way a couple weeks ago, as I think I've remarked before.. and it's just downright sad that I can't post pictures now. Unless I take 'em with the iSight cam in the Mac, I'm out of luck. Take this as the best I can do: 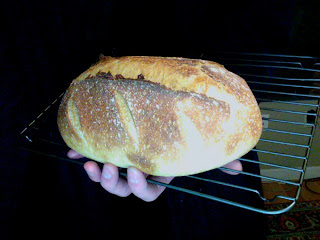 That is the best tasting loaf of bread I've ever made, and this picture won't do it justice! I finally got around to trying a trick from the web that I've been pondering for a while now, but have just been putting off. I sure wish I had tried this earlier! It requires the use of a Dutch Oven (DO), which we just happen to have, thanks to our pal Crystal, who scored one for us a while back. There's nothing different between the bread dough itself, it's just the method of baking that's the key. All you do is preheat the DO in the oven while your dough proofs, and when it's time, lower the dough into the DO using the parchment paper as a type of sling, then stick the cover back on the DO and bake it up.. I baked at 450 because the phenolic knob of our DO is only rated to 450, and I wish I could have done 500 degrees, but I'll have to wait to try that when I get a metal knob. Anyway, I baked the standard sourdough loaf at 450 for 20 minutes, and then popped the DO cover off and baked the loaf for another 10 minutes.. when I first pulled the lid off after the 20 minute mark, the loaf was seriously pale colored and had risen quite a lot. I was very excited about that.. after the ten additional minutes of baking, I checked the loaf again and found it was still too pale, so continued for another few minutes, checking it as we went along.. I think I baked this thing for a total of 34-35 minutes, which is about 10 minutes or so longer than my standard loaf in the oven solo goes for.

The thing that's going on here is multifaceted.. the DO keeps the moisture in the kettle and there's no need for spritzing with water in this method. I also got a really nice 'curl' to the slashes that I've never gotten before, which you can just barely see in the terrible photo above. The loaf seemed to rise a bit more than usual, and the crumb was definitely more open, but also more even inside than ever before. Additionally, and most encouraging to me, was that my sourdough actually was slightly SOUR, which totally blew me away. I was really excited to get that flavor, finally, and we've already eaten most of this loaf in just a few days now. The next best thing about this method is, my crust is about half as thick, and way crispier and more pleasing to eat. Whereas before I had a really thick, dark crust that was a bit chewy, this one is light, crispy, and very full of flavor.. reminiscent of Amy's bread loaves. *very* encouraging stuff here.

It makes sense to me to preheat the DO for this method, since you're trying to get the loaf to really 'pop' and then bake, but there are people online who claim there's just really no difference between using a pre-heated DO and a non-preheated DO.. they put the dough in the DO and let it do it's final proof inside there, and then stick that whole thing in the oven to bake.. I can't imagine how that works nearly as well since the DO is now shielding and absorbing the initial temp jump from the oven and you'd think this would totally inhibit the oven spring effect, but a lot of people are saying no, it doesn't. I'll be trying this for sure.. but now, the chance of getting a loaf of bread of less quality than this one just breaks my heart. But I'll try it.. in the name of science. ;)
Posted by Mike E. at 11:58 AM No comments: Links to this post