Update. Without pictures. Still can't locate my stinkin' camera that I lost the other day.. drats.

When last I typed, I had just scored a heat-lamp from Deb A. next door and jumped the whole fermenter up on there. No dice! Nothing happened into the next day. At that point, I got scared I was gonna lose the batch to some other bugs, so I pitched my neutral strain and left for work. I did take a sample of the wort, though, and it was as clean and sweet as the day I put it in there. So, no worries on the sanitation aspect, I guess. By the time I got home that night, the ferment was pretty nuts from the neutral saccharomyces and it's pretty flatlined in there now, since they (bugs) didn't have much work to do. I have not had a taste of it since I put the neutral yeast in there. Geoff said his smelled like spoiled milk when he went to pitch in his second yeast, but he didn't taste it yet.  That's sorta where we stand right now..

So.. I wrote back to WYeast, and got this response: "There is a chance you will still get some sour beer, though I doubt it will be as sour as possible." So, we haven't lost hope yet. In any case, I'll have a tiny, wee little Wheat beer if nothing else happens. Hell, maybe Geoff's will be *so* sour, it'll be undrinkable unless we blend it with 5 gallons of non-sour beer (that I just happen to have!) to bring it back in line. You never know.. ;-)

In other news, the chickens are really slacking it lately. 2-3 eggs a day for the past week and a half now.. I'm wondering if someone isn't in for a molt or something right about now? Hmm.. also getting a lot of broken eggs with that one chick who lays the very brittle, weak shelled eggs. Poor thing.

Also as an aside, I'm still driving the wheels off the Rustler VXL I bought so long ago. It still runs like a champ, and I haven't broken anything in like, forever. Ok, like, March of last year it looks like.. I've put a pretty good kink in one of the cells of the liPo pack I've got, but hey, I flung it off the hood of my car a while back if you'll remember.. I'll just cut it some slack as a result of that. It still runs like mad with that pack, though.

Garden is going like wild. The peas just sprouted some flowers, and the chile's broke loose with some tiny little stalk things where the peppers themselves will grow, a couple of days ago.

Planning a beer to brew this coming Monday with Frank for the party at Uncle Mike's house on the lake.. Frank thinks he wants to do something with fruit in it. I think Frank has fruit in him. We'll document that brew as best we can with no camera.. drats.
Posted by Mike E. at 9:37 AM No comments: Links to this post

OK, here's some pics and an update on how things are progressing on the Berliner Weisse. This is a shot of the starters for the lactobacillus strain from WYeast in the foreground, and the raw grains experiment to grow some wild lacto (that was later ditched) in the background. 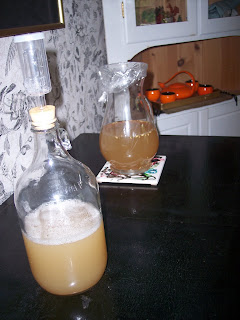 After the brew day was complete, which was a bit of a departure from the norm, what with a *15* minute boil duration, this is what we ended up with. A yellowish colored, sorta murky stuff. Registered at 1.032 corrected for gravity to 1.034 (I think.. might have been 1.033). We had to add a bit of water to dilute because our o.g. jumped up a bit higher than anticipated.. still trying to figure out the efficiency now with this pump doing constant recirculation. The efficiency does go up a bit, it seems. 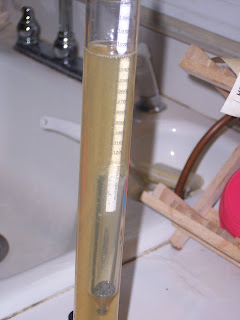 Geoff, caught in the act of fudging the numbers via BrewSmith! 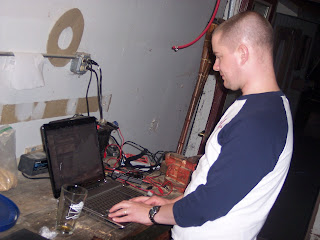 And lastly, a picture of Geoff's actual fermenter on the next day.. he's keeping his at about 85-86, possibly higher, because he's using a heating pad to heat from the bottom and he's measuring the temp in the carboy nearer the top.. and this is his result. Total lacto domination. I've just got a heat-lamp going over mine now, with a jacket wrapped around it for insulation and I'm getting only up to 83 degrees measured near the top. I have *nothing* like this sort of activity.. I've got wispy little strands of colonies  floating on the surface and bits of pockets of bubbles and that's it. Nothing nearly as exciting to take a picture of. When I saw this, I called the neighbors (Thanks Deb!) and scored a heating pad to put under mine, like Geoff did.. I'm still ramping up the temp as I type this and hope to have this sort of activity by the end of the day. 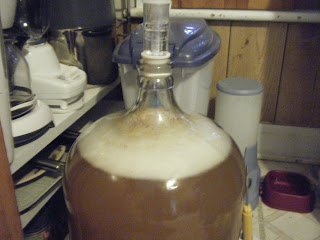 Additionally, m pH test strips are indicating a not-moved pH of around 5.2-ish.. a refract reading of 8.5 exactly, which corrects to 1.034 for temp, and a taste test which indicates nothing but sweetness in the jug. Taste test also indicates perfect sanitation, as there's no off flavors of any sort going on in here as well.. at least I've got that going for me!

Stay tuned, true believers..
Posted by Mike E. at 11:35 AM No comments: Links to this post