Here's a new pic, just taken, of one of the R.I. Reds new tail feathers. I see the downy feathers constantly shedding (they grown up so fast! 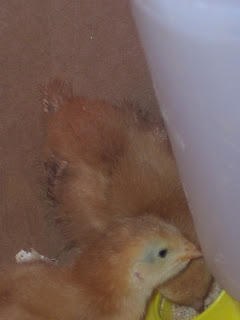 And what you've all been waiting for...

..it's chickens! They finally arrived! It's Sunday morning now while I'm typing this, but I picked 'em up (with the girls in tow) from the shop at just after noon time on Friday. Just getting around to posting about 'em here now, although I did Facebook a bit about 'em when I first got 'em. A Blog post is a bit more involved, you see. Had to spend some quality time to figure out all these fancy words I'm tying right now.

So here's the little scrubs (all five of 'em..) hanging out around the feeder. It took me about an hour to get the temp adjusted just right in the box for them.. I mean, I had the temp set just right to what I thought was going to be ideal (95 degrees is the published norm for first weeker's..), but when I got them in there, the Barred Rock's were clearly irritated by the high temps and were starting to pant a bit. The others seemed a bit sluggish, but weren't panting, so I jacked the heat lamp up about 4 inches and everything changed for the better really quick. Now, they're happy as pie and doing quite well. It looks like they seem happiest with about a 90-93 degree temp spread as measured at the bottom of the box. Here's a closeup shot of a few of the buggers. The Black one is one of the Barred Rock's, and I can't tell from this pic which of the three orange colored beauties is the sole Golden Comet.. You sorta need to see their faces in order to tell the Comet apart from the two Rhodey's... The Comet is a bit fluffier and maybe a smidgen larger than the Reds... but we're talking about a gram or two larger. Hardly noticeable. Plus, the Comet doesn't have the same somewhat darker orange stripe of fluff down the back of the head as the Reds do. 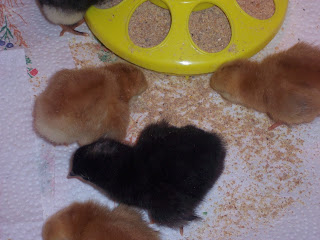 In non-chicken related news, I came home to try and pull a pint of the Pale Ale I made with Jody a while back, only to find FOAM about an inch into the process as the keg breathed it's last.
Posted by Mike E. at 10:47 AM 1 comment: Links to this post