Pulled up the horseradish yesterday.. this is what I got: 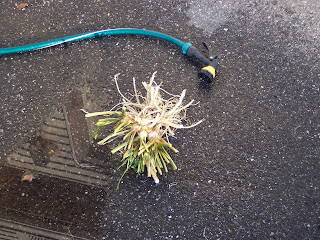 Sort of an ugly bugger. I thought it was gonna be more like carrots, with each root sorta more carrot shaped with a tuber going straight down.. but it's more hop rhizome like than that, with just a big tangled mass of roots all over the place. There's also going to be no problem with next years crop, because this thing pretty much infested the side herb garden area with little rootlets. Awesome. Now I just gotta go get some more llama manure and make that soil area more hospitable. It's really sandy and terrible stuff for growing, really.

Anyway, a little more hosing of off this tangled mass found this stuff underneath.. 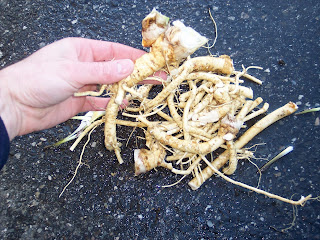 That's the biggest single chunk of root that I found in there. about the same size as that piece my dad brought me from his friend somewhere in America that time.. so I remembered how to process this stuff into the horseradish sauce that we all know and love (well, those of us with taste, I should say..). Easy stuff.. just dice it up into chunks about an inch long or so after you peel the outside layer of rough skin off the thing, and then zing it for a few seconds or so in your food processor until it's almost a paste. Then, give it the sniff test and keep an eye on it for about 30 seconds or less till the stuff has reached the level of pungency you want, and then douse it with vinegar and stir, to cancel the reaction and lock the flavor into place. The trick with vinegar is, once you dice and shred the root into small bits, the exposure to the air is what activates the enzymes inside to break down this stuff inside the root called 'sinigrin'. When this happens, the byproduct of the breakdown process is isothiocyanate, which is an harsh and mean as the name implies. The longer you leave the shredded bits exposed to the air, the more powerful the stuff becomes. By adding vinegar, a mild acid, you quench the process and stop it in it's tracks right where it is.. so, home made horseradish is very flexible stuff.. as it can be as mild or mean as you want it to be. Frickin' awesome!

When I was all done, speeded up in part to my horseradish processing associate Jody, we ended up with this: 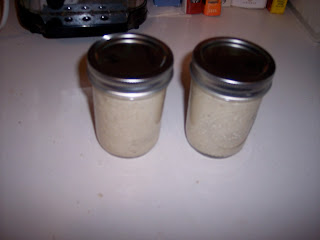 Two jars of heaven. Again, awesome! Next year, I hope to have much more. There is really nothing on earth easier than horseradish, I think.. great stuff and easy to do. Just don't plant it anywhere near your regular garden.. it get's everywhere.
Posted by Mike E. at 10:25 AM No comments: Links to this post

Got me a chicken that's a moltin'.. there's feathers all over the yard. One of the Barred Rocks, the bigger one, is sheddin' all over the place and she really looks like hell now. The kids think it's kinda funny though, and they're collectin' the big feathers from around the yard and keepin' them in a jar.. presumably to re-create the whole bird eventually? I can't imagine why else they'd do that. Check it out.. snapped a few pics this morning of the poor, fashion-less bird: 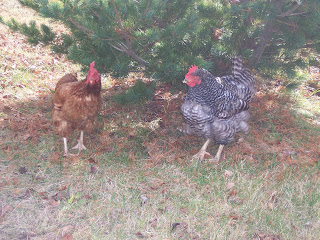 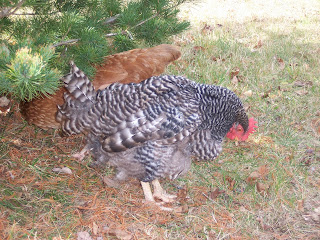 Yeah. Gonna get chilly, I suspect..
Posted by Mike E. at 12:02 PM No comments: Links to this post

Just wanted to share a few pics of the Big Brew we had at Don's Dad's place, sponsored of course, by Don's Dad & Mom as well as Don himself. Great time was had by all. This event also marked the debut of two brand spankin' new brewing rigs, Don and Geoff's metallic monster and Jeremiah's half electric, half propane Frankenbrewery. Here's a few pics of the event and attendees to document the fact that the damn thing happened on Saturday, November 6th, 2010...

So, yeah. Resounding success. And I think we may have even inspired some other non-brewers to maybe look into the process. Seems everyone had a pretty good time..
Posted by Mike E. at 12:35 PM No comments: Links to this post