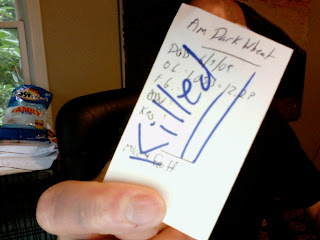 So.. here's Don's other beer, which also happens to be one of my old beers as well.. the Chocolate Rambler! Here's a couple action photos I took seconds after I opened a bomber that Don handed over for review the other day...

Here's the area where I opened it.. 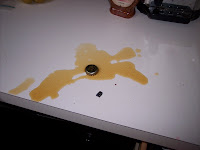 As you can see, there was a bit of a mess as the very-excited-to-see-me beer gushed forth and tried to jump in my lap.

Here's another shot of the trail-of-destruction as we ran to the sink: 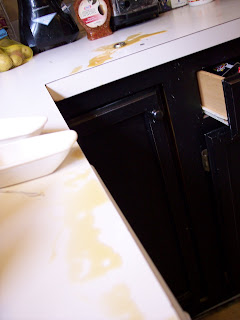 ..and shortly after that trip, we ended up here: 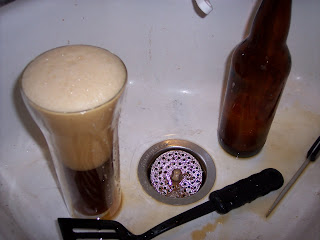 ..in the sink. The entire bottle pretty much blew out of the container and I was only able to catch what you see there in the 22oz Bodum glass, which.. well.. isn't even quite half full.
So.. what'd I think? Well, it was a gusher! No suprise there.. the real suprise was this: It tasted fine!
I taste massive chocolate flavor here.  I *see* the gusher and just *know* it should be infected.. I mean, what else would cause such uncouth behavior? But I get no Brett flavor. No weird sourness. Nothing. Just a really nice, mellow chocolate taste, and low carbonation.. I think the majority of it (the carbonation, not just the beer itself.. ) went down the sink when it exploded. The chocolate is probably more pronounced than my old brew, I would guess because the majority of the carbonation isn't there to layer the beer any more, and the chocolate really gets to storm to the front. Aroma is nondescript.. hard to place. Flavor is so prominent, though. Weird! Quite a good brew... just wish it didn't blow out like that so I could have consumed some more..
In other news, I waxed the Jalapeno cheddar yesterday. This one went much smoother than the last. A few tricks I learned and things were sweet. I put the wheel in the fridge for a couple hours prior to waxing cause it' supposed to make the wax adhere quicker. Which, I think it did. Worked like a charm. I used tinfoil for a protective layer around the stove and counter top and since that stuff won't catch fire like the paper towel I used last time, I was able to put that right up to the edge of the pot on the stove without fear of disaster. Here's a finished shot of the thing: 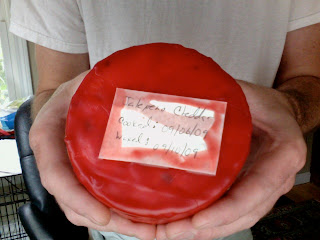 The label is a little funky with wax, but otherwise, it's good. I'll be able to tune back in to this in two months minimum, it says.

That's all. Now go click my Google Ad, you skinflint!
Posted by Mike E. at 10:04 AM No comments: Links to this post

And there it is.. Cheddar!

Just a quick post today with an update and pic from the Jalapeno cheddar. Just out of the press and onto the drying rack, there she is: 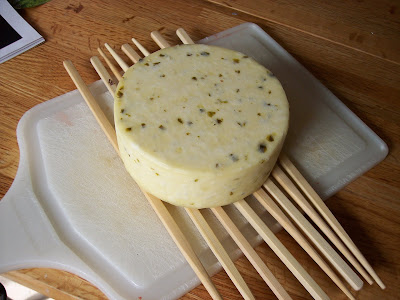 What a masterpiece! Well, we'll see.. in a few months.

Click my Google ads, you skinflints!
Posted by Mike E. at 10:25 AM No comments: Links to this post

Stand back and prepare yourself.. a pictorial view of the Jalapeno Cheddar that I pieced together yesterday afternoon and well into the evening.

Jalapenos there on the left side, just behind the pot of milk.. followed by mad scientist gear, milling of curds, packing of the mold and repacking of the mold over and over. A press of 15lbs, then 30lbs, then 45 and finally 50lbs (the photo with the bottle on the top..) and that's where she sits until 24 hours has passed, which will be when I get home tonight at midnight. More pics to follow.. 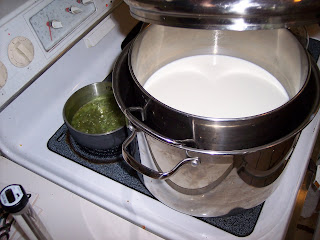 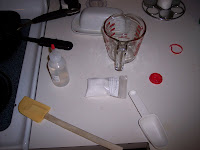 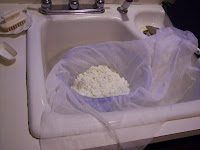 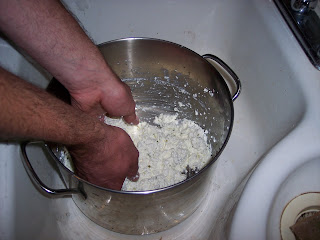 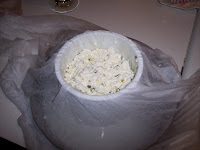 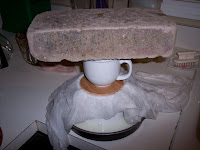 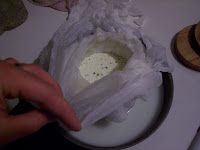 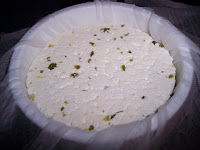 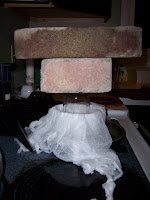 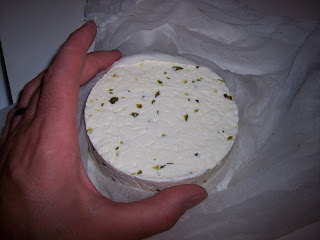 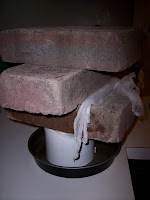 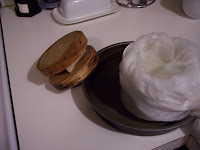 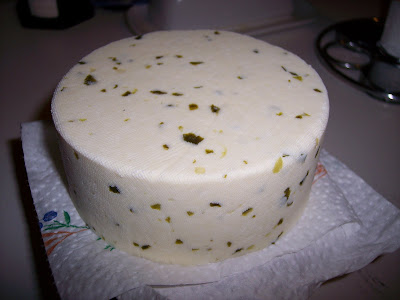 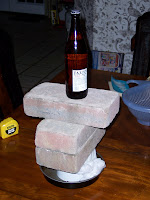 I'll finish this up with some pics of the air drying time and the final waxing in a few days. This is the new, little press BTW.. seems to have worked well, but the same amount of time is used in making one lb or two.. so I'm not sure I'm going to do all of this again for just one lb of cheese unless it's hard to obtain or very expensive milk. But, I've got the gear and I know it works now.. project is definitely a fun time! Cheese is great fun and the product is, hopefully, as good as the process was to follow..
Posted by Mike E. at 11:30 AM No comments: Links to this post

Here's the suspect in question: 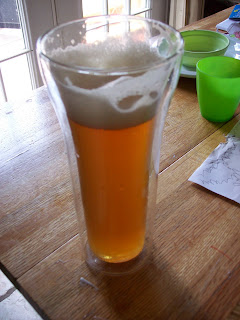 This is Don's Blonde ale, he tells me. He states he put in;
"5 lbs 2-row-  steeped
5lbs extra pale extract
1 oz cascade-60 min
1 oz willamette- 5 min
white labs california ale liquid yeast"
And that's the whole shebang.
In the picture, she looks innocent enough, however... Huge foam with carbonation levels off the chart. A loud "pssfftt" when de-capped. Suspect contamination at work here. Because this is a bomber and I'm drinking this solo, it all goes into a 22oz double wall, straight sided Bodum glass.  Gold is color of choice. Fairly clear in color.. and then, INFECTION STRIKES! There's a definite Brettanomyces wild yeast at work here. Plain as all get out and strong as the day is long. I detect it in the aroma right off the bat. It is inviting to me. A seperate aroma of "chalk" reminiscent of my own Brett beeers... is this just me, with the chalk thing? A big flavor of Brett yeast, with high carbs felt on tongue.. Brett beats the life out of any sutle flavors that might have been here. Atomically small flavor of cherries or strawberries.. A fairly good ammount of residual sweetness still remains, and I have fears that any remaining bottles of this thing will pop soon. Drink it up, Don! Don't hold back for long!

In any case, this is a Brett beer (whether he wanted one or not), and as such, I loved it!  Drank the whole damn bomber solo! I'll mention, I've never had a Brett infused pale ale before.. this was my first. I was contemplating doing one, but have been nervous, as I wasn't sure how it would come across.. I've been under the impression that the darker beers were mostly used as Brett test subjects because the roasty notes left a bit of complexity in there so as to not make it one dimensional.. but apparently, it can work just fine. I'll be looking into more it from here. Thanks for the fix, Don!
Posted by Mike E. at 5:57 PM No comments: Links to this post