Brewed up what appears to be a really sweet beer with Jody R. today.. started at 0930 hours-ish, and finished up in the evening. Midway through the brew, we got interrupted by a fairly midsize black bear that was wandering through the neighborhood.. Check the pics: 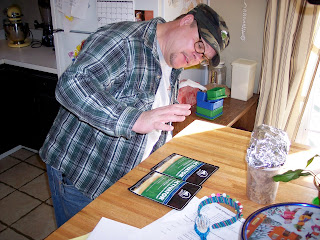 The new sparge rig. Quick disconnect, plus a 90 degree elbow to a length of hose and a custom drilled endcap thingy. It's all to secret, really.. no more details. Unless, you know, you ask nice.. 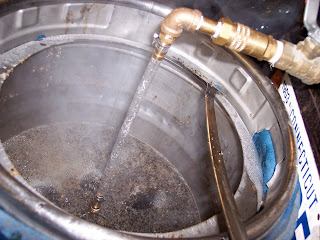 Me, chillin' with some wort.. (disregard that cop car in the background..) 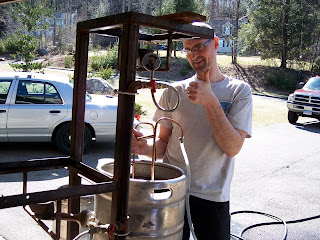 What that? Is that a Bear???? Ah yes, good ol' #79 back again.. this bear has been seen in the neighborhood a few times recently, and has a clearly labeled set of tags with the #79 in both ears plain as day. 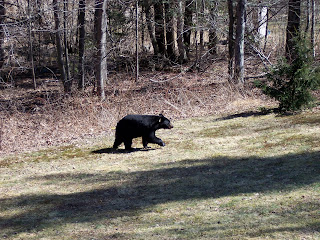 Someone grab a camera and get a closeup! Who'se the idiot behind this lens??? 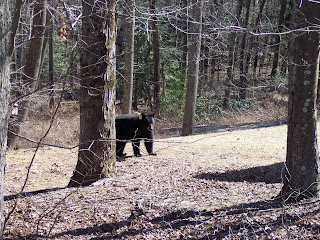 So, as you can see, this beer went according to plan *and* we got to see a big ol' bear in the process, thus the name Black Bear Belgian Stout.. that's just how it goes around here. weird things in the brew-day lend themselves to the naming process. The beer is a Belgian inspired thing with the WYeast Ardennes Belgian yeast infusing a fairly complex Stout recipe. Roast, Black patent, Dark Candi sugar, Special 'B', Pils and two row... not too weird, but more grains than a normal Stout by a long shot. It ended up at 1.066 with compensation for temperature. Should be fabulous, as it was mighty tasty out of the hydrometer. I'll keep you posted as time goes on.

In other news.. nah, I'll save that for tomorrow. Stand by..
Posted by Mike E. at 9:15 PM No comments: Links to this post