Oh no he just didn't!

I am pondering, seriously, the purchase of a tractor. There, I said it. It's on a BLOG so it must be true... this is the machine/love in question:

Just read over the last couple of posts I had on here back in May. Since then, all of those baby chicks were kiled by a raccoon, we trapped and eliminated the raccoon problem, got a big Rooster for a week and a few days who jump started all of our laying hens who have since co-parented (Rose and Ella chicken doing the parenting..) a new clutch of 4 tiny chicks. Here's a pic of two of them: 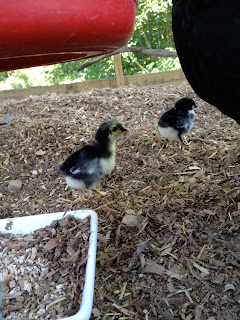 Hard to get all four of the new kids in the same pic because they're each being raised by two different hens, who don't always stand next to each other. :) Again, statistics say there's gona be two boys and two girls out of this group, so we'll see how that develops. They're 5 days old at the time this pic was taken, born/hatched on the 21st of July.

Garden is doing well, too. Here's a shot of that madness: 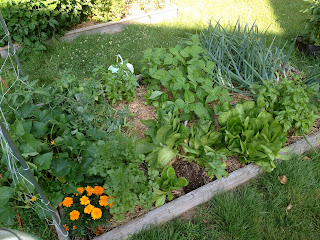 Not the best overall shot, but it'll do. You can see the onions on the right, beans starting in the back center, Romaine in the front center, some basil in there (which we havent' done a darn thing with..) and the pickling cukes climbing the trellis on the left. Tomatos in the lower bed you can't see in this shot (very well, anyway...) are taking over half of that thing. Going to be lots of them this year...
Posted by Mike E. at 8:22 AM No comments: Links to this post

Garden is doing fairly well. Still a bit early in the year and things are growing slowly... but some things to report on. Check a few pics:


This one is a bit different... it's out in the front yard, where I get more sun. It's a new thing I'm trying called Straw Bale Gardening. I'm just doing the one this year as a test. I have been soaking this straw bale for a week now, keeping it moist under this piece of plastic.. the internal temp of the bale has been up to 130+ degrees as of the day before yesterday as the interior begins to break down and compost. When the composting stuarts to subside, and the temps go back down, I'll put a tomato in the center of this thing and the then a stake through the center for the plant to get strung up on. The plant will eat the composting bale as the bale continues to break down slowly, acting as sort of a long time slow release fertilizer. I might also put some other plants in at the base of the bale.. maybe a mellon or something that could cascade down the ide and stay out of the way of the ever expanding tomato up top. The dark spot in the center under the plastic is a handful of compost I put there to get some beneficial bacterial started into the bale right off the bat...

In other news, the little guys are starting to get bigger... one week and three days later after hatch: 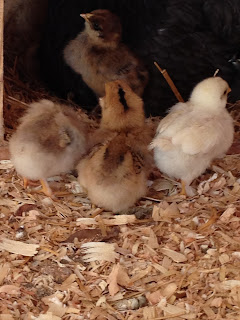 Posted by Mike E. at 9:57 AM No comments: Links to this post

WTH.. Looks like Blogger has radically changed in the past six months, which is about when the last I posted was. Snap! Let's see if I can figure this out now.. anyway, this is a quick pictorial of what's been going on the past three weeks or so that's very exciting, pay attention now, here we go:

24 days ago, our grey colored chicken (Rose, the kids call her..) didn't want to get off the nest box. I thought something was wrong with her, because she was doing the same thing our first killed chicken did.. which was make weird noises and wouldn't move. This is her back then: 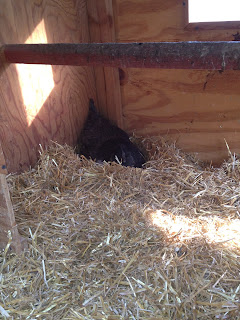 A google search indicated that perhaps she wasn't dying after all, but instead had just gone "broody" which means she just wanted to hatch some eggs and raise babies. Why this happens has something to do with the change of the season to spring and lengthening daylight hours and such. It's a mom thing, really.  We have no roosters here at The Fortress of Awesome, so this is sort of pointless to do for a chicken.. but she doesn't know that. Genius that I am, I went to the farmer up the street who does have chickens with roosters in the mix, and I got some fertilized eggs from him, ten in all. I brought them back and presented them to Rose, who readily accepted them. Ten days later, we candled the eggs by shining a flashlight through the egg from the back side, after dark, and took a peek "inside". This is what we found inside eight of the ten eggs. Look close, those are blood vessels and such of a forming chick: 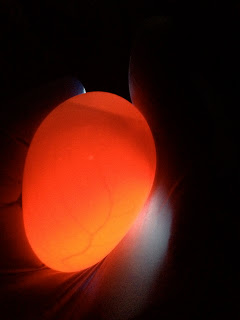 Fast forward to day #20 of this bird sitting on the nest and we found this at about noon: 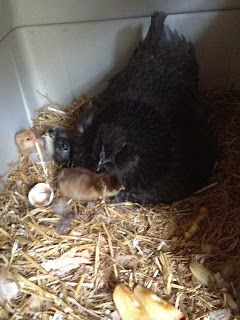 All in all, eight chicks hatched out, but by that evening, only seven were still alive. Sad for that one, so we had a burial and then carried on with the rest, who are terribly fun to watch. The antics of the momma hen are just incredible. To think that this bird has never had a brood of chicks before, and the instincts to sit on a nest for almost a month are built right in, then the desire to teach these guys to eat and drink and defend them from the other birds in the coop from being picked on... all built right into the chicken, with nothing more for the "farmer" to do. No heat lamps, no brooder box, no tending to day old chicks in a cardboard box to make sure they're warm enough but not overheating... just let the momma hen do her job and they come out just fine. And better yet, absolutely free!

They had their first venture out of the dog crate we had them housed in just a few hours ago on day 24... today. Here's the weird pic of the momma hen sitting in front of the chick waterer and feeder.. I panicked a little when I didn't see the chicks in the box anywhere in sight: 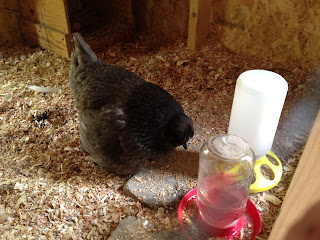 Turns out there were there after all. Under the momma! She keeps her feet apart, her feathers puffed all out and her wings drooped down low to trap in the heat.. the babys just keep popping in and out from under her to regulate their own temperature as they like. Cool system. 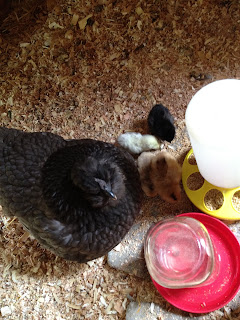 Posted by Mike E. at 3:52 PM No comments: Links to this post

Yeah, so there's a bit of a time lapse here between this post and last. Still doin' stuff, but that freak blizzard crap.. jeez. I wish I had a picture of the 15" or so we got in one single day in *October* that killed my plants... but suffice it to say, they're all gone now. What we have left is a few cleaned up garden beds and some garlic being the only thing that's gona spend the winter in 'em.

Did my first batch of jelly the other day. Used the wild grapes I've found in the neighborhood as well as a few lbs I've found out and about in other parts of the world (top secret locations!). This is 4.8lbs of wild grapes.. 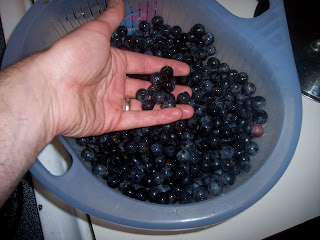 It was actually pretty stinkin' easy. In order to do it, I had to buy a new (had to? Well.. that's debatable..) kitchen gadget. But I've found this thing to be pretty useful in the jelly making role. It's a thing called a Food Mill, and it's a hand cranked thing that just sorta squeezes the heck out of whatever soft food that you put into it, and leaves the skins and seeds behind, neatly separating them. It supposedly makes the most awesome mashed potatoes, too. Here's a pic of it in action: 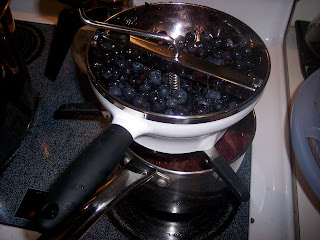 After this, you simmer the grapes for 10 mintes, strain out the solids from the liquids and then add a truckload of sugar and the pectin, bring to a boil and then start ladling into the cans. Process for a super short 5 minute time span and then leave 'em be. This batch made six, eight ounce jars and one small kitchen glass that I put some of the leftover stuff into. It's got a very strong grape flavor that's *way* better than I anticipated. It's actually quite, quite good, and now I'm on the hunt for some more grapes out in the wild do do up some more. Here's some more pics of the rest of the process:


Additionally, I just whipped up and caned this 4.5 pints of hot pepper relish. It's made of a combo of my Portugese Hot's, Jalapenos, and Hot Cherry peppers.. I did not expect it to be very hot, and actually picked a few Habaneros to spice it up a bit after I got it all mixed together, but after it simmered for a bit a taste test showed it was quite spicy indeed. The Portugese Hots aren't all that hot, raw, so I'm not sure where all that heat came from. These are gonna be for sandwiches and hotdogs and stuff.. take a look: 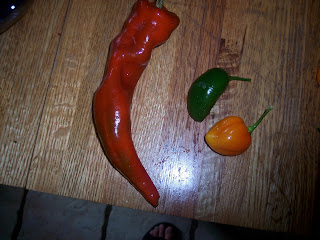 Here's a couple pics f the new-to-me but far from new pottery kiln I just got. It's an old dog, but appears to be in pretty good shape. Looks like it was only fired a couple of time, really.. inside is almost perfect. Got a whole box of standoffs and plates to go inside with it, too. 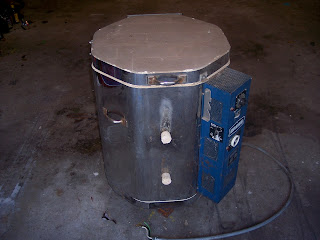 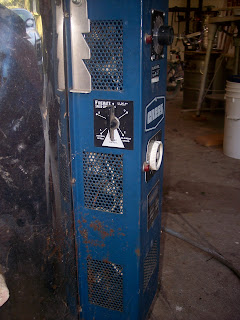 I know it turns on and generates heat, but I'm not sure how accurate it all is. It's old and will have to be checked out and tuned up I'm sure, but I believe it works. I didn't plug it in here, but we flipped the breakers on at the place where I picked it up and it worked (well, turned ON) out there just fine. I'll have to get someone with some experience in here to help me with this one..
Posted by Mike E. at 12:25 PM No comments: Links to this post