Oh, snap! having been on since last MAY, the Oro de Maggie, tribute beer to my ol' dog Magg's went dry a couple days ago. So sad! Almost made it a year, it did. The Kombucha Project was nipping at it's heels though, and moved things along. 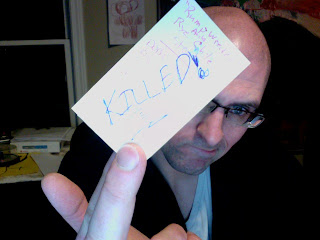 But thats not all! The Rump Wrecker Rye, Ancho chile stout, has gone the way of the Oro de Maggie as well. The dreaded double-whammy!Two kegs beaten to death, simultaneous-like! What to do? Replace 'em with new kegs, of course! A re-brew of the Chocolate Rye Stout has taken the place of the Chile Stout and the previously mentioned Kombucha Project has taken the fridge space of the Oro de Maggie.  Give me a week and I'll have some results from that stuff, tasting wise..
And then, from out of the blue: 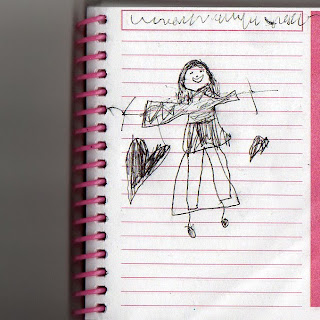 ..a picture from Lynda. Good job, kid! Just like her momma.. an artist!
Limited time today, kids, I'm out of here...
Posted by Mike E. at 3:42 PM No comments: Links to this post 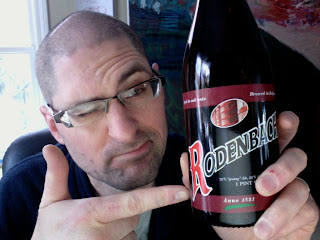 This is the regular Rodenbach, not the Grand Cru. The Grand Cru is one of the finest beers I've ever had the pleasure to drink.. it is lovely. This regular version is also a fine beer, just not in the same ball park. It's a sour beer, a bit, but not overly so. A normal person could drink this and not get irritated. :) I drank this one with Uncle Jack the other night and had a grand time. It's just a touch sour, but wickedly complex. And when I say flavors of prune juice abound, don't take that the wrong way.. it's really delicious. I am a big fan.

Brewed a beer yesterday with Pete, but we got no pictures. Didn't really think much about that until too late.. Here's a shot of it in the fermenter now, bubbling away. I have to give thanks and props to Jody again, cause this is my 3rd re-pitch of this particular yeast, and it supplied the beasties for Pete's half of this beer too.. that one vial has gone into 20 gallons of beer so far, and I'm not sure we're done just yet.
Brett 'C' may be the new house yeast here, depending on how things go. Heh.. There may be a time in the not too distant future.. like, say, 3 weeks, when every beer on tap is Brett 'C' fermented or some other wild culture. 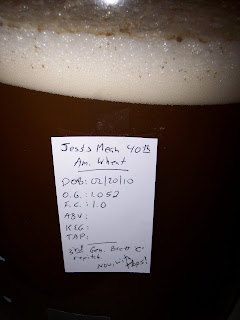 We're calling this one "Jess's Mean 40th - Am. Wheat", because.. well, nothing went wrong in the brewhouse this week. That makes it like 4 brews in a row with no disasters.. and if you're not familiar with how 2nd Shift Brewery get's it's beer names, it's always been based on disasters and things that go wrong during the day, no matter how small they were. Well, with a bunch of smooth beers brewed recently, I'm having issues with coming up with names. I'm trying to think of a new way to name the beers now, sort of like the way weather people name the storms, or something. That was The Boss's idea, and I kinda like it. But I'm not sure.. suggestions welcome. I was sorta thinking about doing the Military phonetic alphabet thing somehow, and that would also help me keep track of the numbers of brews I do in a year, too. Any thoughts?
As an aside, I notice about half of you jerks that are "following" this blog don't have pictures attached to your profiles, and that really irritates my OCD parts. Can you people fix that, before I have a fit? Thanks! ;-)
Posted by Mike E. at 10:33 AM No comments: Links to this post