I believe the Kombucha Project is a failure. All at the same time, this saddens me and relieves me. It saddens me because I had hoped to stumble across something new and interesting to use in creating beer, unique beers.. but I think what I've created is completely disgusting. I just poured a 1/4 glass sample of it. Since it's been on tap in the fridge for two weeks, it's had plenty of time to carbonate. For one, it won't hold a single bubble of foam. Two, it smells like malt vinegar (yes, there's a reason for that..), but doesn't taste quite as good. See, I *like* malt vinegar.. but this is more like malt vinegar with a big fresh dose of garlic, Lawries salt, and a pinch of nasty all thrown in the mix. It is not pleasant to drink. It does not remind me of a sour beer.. it reminds me of something gone wrong in a glass of beer that you forgot, which got left behind from last new years eve's party and you just happened to stumble upon now while doing a deep cleaning. Something fuzzy grew in that glass and you don't wanna delve deeper.

It also relieves me, because the thought of the research and future brewing experiments needed to be done to pin this thing down totally made my head spin. I'm just relieved that I'm so put off by this thing right off the bat that I don't have to do those experiments! Don't get me wrong.. I still like Kombucha. Actually, I like it quite a bit.. but the Kombucha tea and the Kombucha infused beer project are two *completely* different animals. Completely.

With all that said, anyone reading this that wants a keg of gross, or a growler or two for fun, please speak up. I'm going to take it off line maybe tomorrow, and set up the Brett. Pale Ale in it's place. I'll put this keg off to the side for a while, but eventually I'm going to flush it. Tis will be beer #2 that I will consider a total failure. Not through mishandling, just through bad recipe development. Not bad in an 8 year span of home-brewing.. but man, this keg has got to go!

In chicken news, the birds have taken to doing laps around the yard the passt few days. I've let them out of the coop late morning, and they mosey down the southern edge of the property, travel up the eastern edge through the woods at the base of the hill in the back yard, come across the north edge through the thick section of woods through our neighbor pals section of scrub, and then just walk across the front lawn like they own the joint to get back up to their coop. It's funny to see them marching around the property like this, all in a row.. talking and clucking and scratching up dirt the whole way. It's a slow march and takes a couple hours, but it's still funny to watch.
Posted by Mike E. at 12:27 PM No comments: Links to this post

I wasn't home when this happened, but the wife says she saw a big black bear out near the chicken coop yesterday. Brave woman that she is, knowing her priorities, she immediately tried to startle the bear with banging pots and pans. When that failed, she Rambo'd up, and got the keen idea to simply attack the creature with THE FAMILY TRUCKSTER before it could do any damage to the chickens or the chicken coop. What a girl! Apparently, that worked quite well, cause the bear ran off quick on seeing my angry wife behind the wheel, bearing down on it at full speed. Or something.  Good job, Sa! 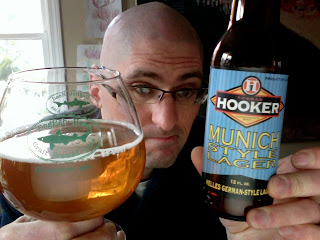 In other news, this is the latest beer I've gotten my hands on thanks to Timmay, from his cohorts in the Thomas Hooker brewery, in Bloomfield, CT. The Munich Lager. they call it a German Helles style.. but I'm not so sure. Timmay did the packaging on this, or at least a bit of a restyle of the stuff. Pretty dapper! It pours a nice gold color, but doesn't keep much of a head for some reason. I get a couple of aromas on the nose.. one is a fruity, bubblegum like note and the other is the tell-tale Munich grain flavor. Quite fun! Very easy drinking... sort of like a mini-me version of their Nor'Easter.. sort of. It has that same sort of flavor. Almost as if it's spiced, but not by very much. A bit of a Vanilla taste comes through as well. It's a curious flavor.. and I like it. There's a definite bitterness here, well dampening the malt.. and if they came through a bit louder, you might be able to pick out which hops they were, but I can't seem to reach that deep right now. I do have a bit of a lingering head-cold at the moment, so maybe it's just that..

No pics for this one.. but just wanted to drop a note to indicate the new Brett. Stout is carbed up and ready for consumption. I just had a small taste (more on why in a moment..) and found it good to go. I assume the Kombucha project is the same, since it was kegged the day before.

Anyway I only had a small taste of the new stout, cause I'm a little under the weather still.. been battling a head cold/ear infection for the best part of a week now, and it's put my beer stuff on the back burner. Drats! I'm not sure what's worse, a serious illness or lack of beer! ;) In an case, the Stout tastes quite good, and is definitely reminiscent of the old one that was *so* good.. except, since this one was done up with brettanomyces yeast, it's got a slightly different taste to it. And, not in a negative way do I mean this, but it has a bit of an 'iron' flavor to it. I'm not sure how to put it other than that. It's a good chocolate stout, with a serious chocolate flavor and good depth and complexity.. but a hint of iron bite to it in the end as well. Not bad, just unique to the yeast, I guess. Interesting. Stop by for a taste and let me know what you think?

Chickens are all happy to be let out the past few days, since it's warmed up so much and is nice and all outside. The feed bill has definitely gone down since I started letting them out. They hardly touch the food bucket when they're outside.. right now, you can hardly see them down the hill the're so far from the house. I worry.. a bit.. but I know they have a bit of shelter from the flying predators in the bush they're in like that.

Gallery opening yesterday afternoon. The Boss put on a good show and things seemed to go well. They definitely had the most interesting stuff to look at.. there was only one other artist in the house that had anything decent otherwise to look at. But then, *that* guy didn't have Hudson Valley Applejack at his booth, either. ;) Strange stuff, that. 80 proof, just like any other whiskey or brandy.. but smelled only of fruit and flowery stuff. Keep in mind, my send of smell in my current condition is terrible, though.. but it packed a kick like anything else labeled 80 proof. Like I said, interesting stuff... thanks Kevin!