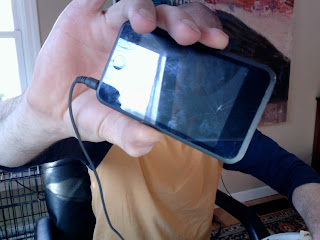 I know it's hard to see in this pic, but that's a shot of my beloved iPod Touch with a big crack in the top end of the screen (which is shown at right, here). Not really sure how it happened, cause I didn't drop it or abuse it in any way. The fellow at the Apple store (a real, live Genius!) said he's seen it in the past where someone puts an iPhone or Touch in their pocket and bumps into a table, thus cracking the screen, and you're none the wiser, cause you didn't do anything that you *know* of. Maybe that's what happened to me? Dunno. End of the day, that same nice fellow sent me home with a new old stock 8 gig replacement model and I was smiling again. I was going to buy a case right then and there, but.. well... they didn't have any cases available for the 1st gen models! Ah well... I love Apple.

In other news, Jody sent me home with a couple bottles of his new IPA. I've got them on stand by here, and home to dig into them during this coming weekend for a downright brutal review of this highly touted product. We'll see how she stands up to the pressure.

Timmay's party also coming up this weekend, and there's sure to be some news from that session when the time comes. Stand by for that news as well.

Right now, I'm drinking a cup of Kenya Gethumbwini AA that I got from Rob, over at The Plymouth Roasting Company. Only took home a lb and a half or so, so it's gonna be a short lived run, but it's a nice cup so far. Day two after a roast of just into 2nd crack. a really good brightness and acidity, not quite balanced, but then.. why'd you get a Kenya if you were looking for anything else? Hint of lemony-tea in here. A slickness on the tongue that I'm not quite certain of.. not disagreeable, but odd. Really delicious stuff. I know it's insane, but I'm going to do a shot of this S.O. Kenyan puppy in the La Pavoni later on.. probably tomorrow, just to see how much it hurts. Wish me luck. ;)
Posted by Mike E. at 10:15 AM 1 comment: Links to this post