Did something funny today and jury-rigged up my HLT.. no switch, no safety covers, just plugged it straight into the wall and let it rip. Talk about yer' reckless! 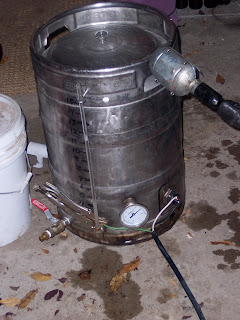 Did this with a mostly typical strike water sized volume of water.. 10 gallons. Actually, most strike water volumes for the beers I brew are more like 8.0 to 9.5 gallons for the initial batch of strike water.. and somewhere generally in that same ballpark for the sparge water after the mash. But I figured, let's go large, right? So, I filled it up with cold water from the outdoor faucet which leveled out at 10 gallons of 58 degree water. Then, I plugged in the element and started writing down numbers and times.. I started out doing 2 minute intervals, but I got bored of that pretty quick, and moved to three minutes.. then I missed one along the way and moved to four minutes. It seemed to be doing a pretty straight temp rise anyway, based on the rough numbers in my head that I was seeing, so, whatever.. I then whipped out a handy online graphing program and plotted the 21 data points I gathered and.. lo and behold! This is what I got: 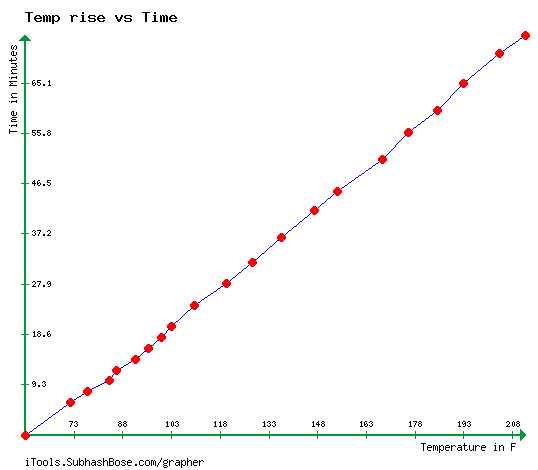 Damn straight, that's a pretty straight line. What the chart is failing to show, for some reason, is the last two points on either end. It ended up boiling at the 74 minute mark, and that's off the chart up there. The main thing to look at, however, is that I never heat stone cold water. I always heat water from the hot water tap that comes out at like, 160 degrees or so.. by the time I get it into the cold HLT and all filled up, it settles in at around the 140 F range, and we heat from there. I can't recall ever measuring exactly how long it takes propane to heat water from 140 to a typical strike water temp like 162 or so, but I'd guess somewhere in the 25-40 minute range. We're usually milling grain and shooting the bull and drinking coffee at this stage of the game anyway, so it doesn't matter much.. but according to this chart, this element will heat from about 140 to around 162 in roughly 10-12 minutes. It's about a 10 degree rise in temp every 4 minutes or so, give or take.

Just got back from the welder shop where I picked up my newly modified kettle that now has the big stainless steel nut welded into the side for the electric element to attach on to. Check the pics for some detail. 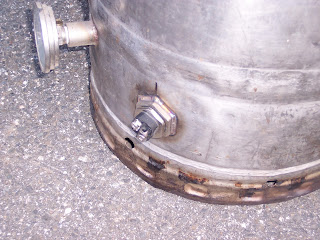 The next step is to gather up the appropriate parts to make the connections from the 220v wall outlet to the element, which includes the switch, the box to hold all the parts, the wire holder thingy, and the plug itself. I've already got 16 feet or so of 14 gauge three strand wire, so it's just the little pieces I've got to gather up now. I think a trip down to Lowes should pretty much do the trick. I've been talking to my electrician friend Dave E. and my other ingenious pal Jeremiah to work out the details of all these connections and how to make it safe and workable, and I think I have a plan in mind. Stay tuned for that..
Posted by Mike E. at 4:05 PM No comments: Links to this post