Just a quick update here with some new pics I scored from Frank. Thanks Frank!
With that said, here's some import stuff being discussed here... clearly. That handy quick reference guide on the back of Rob's shirt came in handy more than once, I can say! 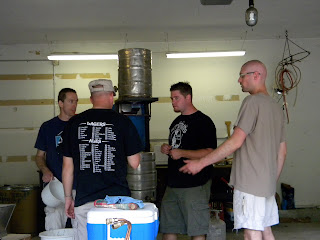 Jody and Alex here, up to no good. 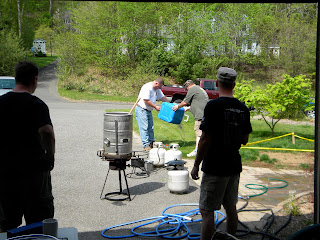 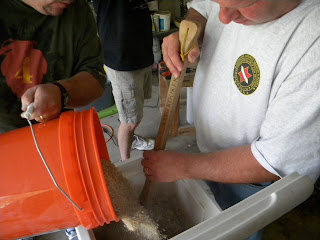 Somebody's wort run off, and almost over.. believe this is Frank and Rob's.. 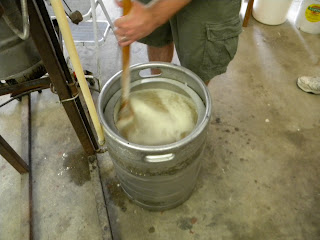 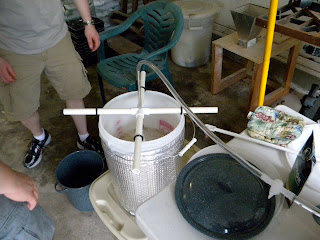 Sa and Will discussing the finer points of IPA's.. 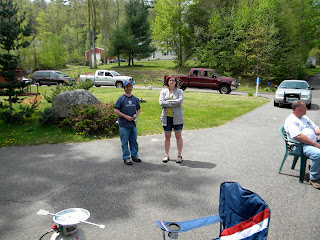 This photo speaks for itself! 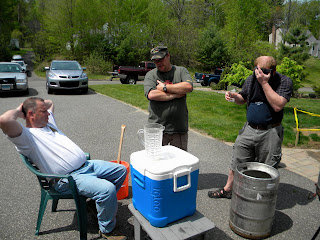 And, last but not least.. an overview of the chaos in the garage. And, Timmay! (he did show up afterall!) 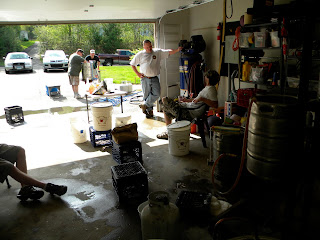 Oh yeah! And most importantly, I forgot to mention this: Yesterday at the Big Brew, we formed an actual, legitimate, fully certifiable (yeah, he said 'certifiable'..) homebrew club. The Krausen Commando's! Tricky.

Check it. We even have a domain name and .com now..

Ain't nuthin' there just yet.. but give it some time. We voted on some initial peep's into office as well, including Timmay P. for Prez, Geoff D. for Vice and Will S. threw his junk in the ring with a hard fought battle for Secretary/Trezurer. Yeah, I spelled that right. That's how hard core this group is. As I heard, Geoff already fired up the club on the American Homebrewers Association site to get us super-legit.. fame and fortune is just around the corner, rest assured.

That is all for now, dismissed...

Commando Mike
Posted by Mike E. at 3:52 PM No comments: Links to this post

Ok! So yesterday was the 2010 beginning of the year Big Brew here on Heritage Way. Check the pics for some details..
Rob and Frank, workin' some mill magic: 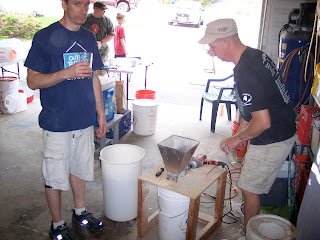 (ignore that minor in the background. he didn't have an arm band, so wasn't allowed to drink..)
Geoff and Savvas here, during a lull in their furious brewing action.. nobody in house had *any* clue what these guys were brewing in their top secret corner. It was very 'hush hush' there.. 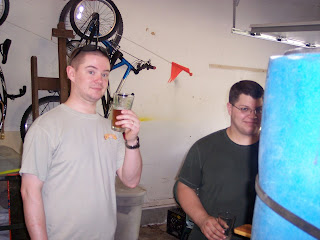 What the heck was Cory 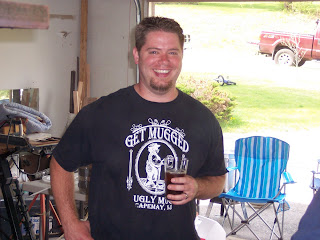 Jody, always a staple in my garage it seems, and a couple of knuckleheads in the background.. I think Jody brewed a Wheat beer of some sort, but I'm not positive.. 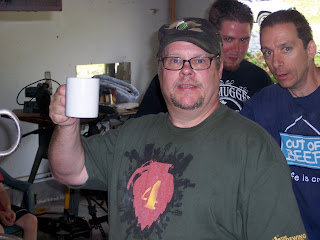 Dan, the Man, my brewing pardner. During the course of the day, me and this screwball pulled together a big brown ale with a good amount of hops while assisting Rob and Frank who were also pirating half of my brewery to make their beer. Rob and Frank, btw, whipped up a classic Double IPA. 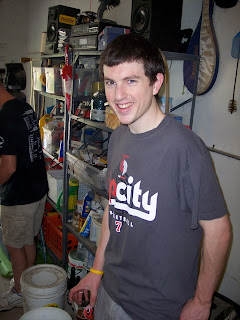 Here's the only spy shot of G&S's secret table that I managed to get before security threw me out.. Gawd knows what's on there and how much of it is actually legal to own in this state.. 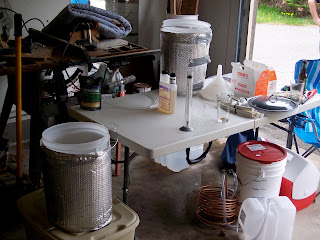 Jody and Alex's rig set up out in the driveway. These guys are hard core for brewing in the sun.. especially when they didn't have to. They EARNED their beer. 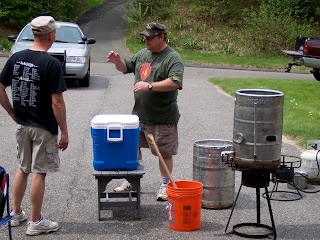 And during the course of the day, the mini-keg of the Black Bear stout, soured with Jolly Pumpkin's 'Bam Bier' yeast cultured up from a bottle of same, was killed. Really a cool treat to have 10 people on the back deck after a hot day brewing drinking up a storm of different beers, comparing notes and just enjoying the day.. and then suddenly remember that you have a mini-keg waiting for you in the fridge! Chunk that thing down on the tabel in the center and pass around the cobra tap. Good times! Wish I had a pic of that to post for ya'.. but wasn't thinking at the time. Drats... 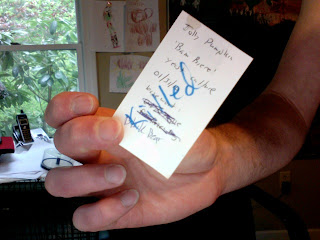