Just a quick one today to chronicle the 2010 hop crop. I dug up and gave away two of my plants a couple weeks ago, and so I'm down to growing just two this year.. 4 was too much, and I never used 'em and the maintenance was too high. Decided to drop back to my two favorites and grow te heck out of them, hopefully. We're doing just Nugget and Cascades this time around. Check these pics of the 'power pyramid' trellis thingy (as w've started calling these triangle things I built..) they'll be growing on this year..

Here's a shot of the Cascades just popping up: 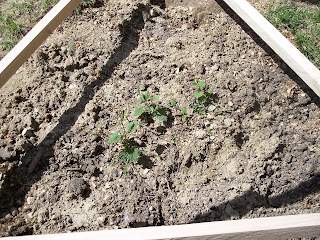 This here is the entire setup for the Nugget plant.. 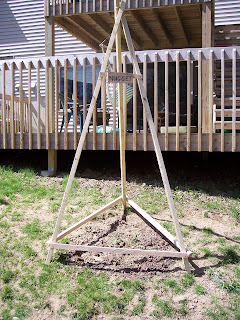 Sweet placards I made up for 'em, eh? 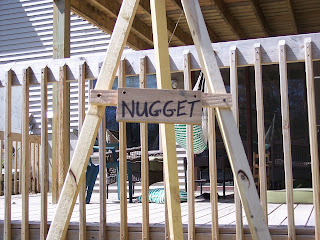 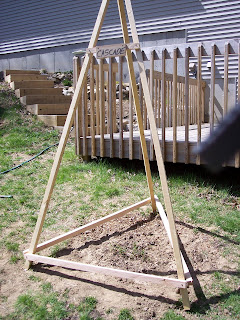 I like the look at stability of this idea.  hope it works. In futre blogs, we'll chronicle the growth of the plants and how I'm going to string the twine for them to grow on.. I've got a couple ideas in mind, and I might try something different with each one to see how they work. Stand by on that..
Posted by Mike E. at 12:45 PM No comments: Links to this post 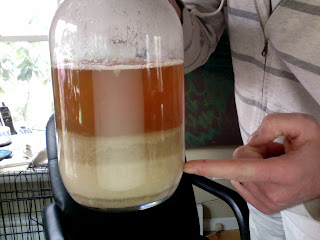 In the photo, I'm pointing at the middle layer of good yeast that could have been re-pitched, had I wanted to. Wait, backup. Process! As I understand it, you boil about 1/2 a gallon of water or so, and then cool it, just to sterilize the stuff.. then, when you've racked a beer just out of primary and you have that big pile of junk on the bottom, you pour this cooled water into that fermenter and swirl the stuff around to loosen it up. Then, take your also just cleaned and sanitized 1/2 gallon growler, like the one in the pic, and send all that goop from the fermenter into it. Give it a swirly, and then let it sit. After a few hours, or overnight, the trub and hop matter will sink to the bottom (seen just under the white-ish later I'm pointing at here..) and stay there. The good yeast is the stuff in the middle layer, and supposedly, the dead yeast float on the top layer.. What appears to be "beer" here, is actually just the boiled and cooled water that's mixed in with some other stuff, which made it pick up some color that gives it that amber look.

This is all very interesting and you'd think "great, now I've got a good pile of clean yeast to re-pitch" but the problem came when I tried to separate it.. the stuff just all starts to flow out in a three colored stream and I couldn't get 'em to be distinct, separate piles of goop. So, what now? I dunno.. maybe a different vessel with a larger opening to pour out of would have a different result? I'll have to goof with it some more. Good experiment though.. was interesting to see the way it turned out..
Posted by Mike E. at 10:56 AM No comments: Links to this post

Foxtrot and Black Bear update, Red beer down and Curieux.. 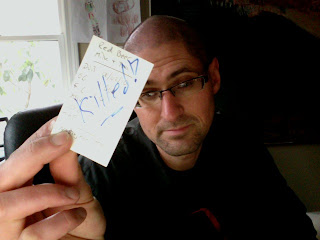 The Red Beer, brewed with Timmay back in the very beginning of January, is down! Good beer, that. I just stuffed the mini keg of the Irritable Bear sour stout in it's place for carb'ing up for the May 2nd Big Brew we're having here.. Irritable Bear is the one gallon sour version, fermented with the Jolly Pumpkin 'Bam Bier' strain of yeast, of the ol' #79 Black Bear Belgian stout I brewed with Jody. Probably soon, I'll take that minikeg out of there and put the Black Bear stout itself in there.. for a bit of a tasting on the May 2nd fiesta. The Foxtrot IPA (109 IBU's!) was kegged yesterday as well, and that'll go online when the next keg goes off..

Tap #4 is hosting the 100% Brett 'C' beer I did way back as well.. and that's doing fine too, and I'm getting more of an appreciation for it now as time goes by. Had a fellow over yesterday (Vincent) who is a member of a rag-tag group of brewers in the Harwinton/Torrington area not affiliated with a club at this time, who I met through a Craigslist posting when he responded looking for some hops.. anyway, he popped in and had a taste of that and mentioned that he thought it tasted like a German Riesling wine.. which I thought was pretty curious and fairly accurate, when looked at in that light. Interesting.. more on this fellow and his crew (who brew on a 20 gallon+ system!) when more intel is gathered about them. So far, they operate under the radar like brewing ninja's.. 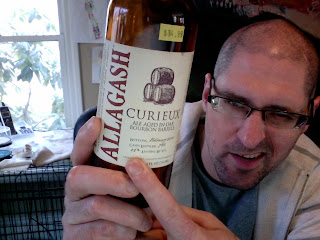 Another friend came up a couple nights ago (Hi Colin and Dawn!) and brought this thing with him, Allagash Curieux, a bourbon barrel aged thing of 11% power. The oak is pretty restrained in this pale colored beer.. it's a hot one, though.. burns just a bit on the palate, but a 12oz glass is manageable solo. Bring a friend to finish this whole bottle, though.. a well done beer of some complexity, but no sour, which I was sort of expecting being that it's from Allagash and barrel aged. One would just expect it, no? Well, no. Hmm.

In sourdough news, I brought the culture back to life after a harrowing battle of a near sourdough death experience. The problem was solved with a small application of pulverized 2 row barley. Ingenious! Fired that sad stinkin' yeast beast up right quick. In the midst of the build up of the dough as we speak...