I'm falling short today on what to write about, but wanted to say I did rack the funky pale ale I brewed with Pete, into a keg. It dropped from it's previous 1.032 down to a much more manageable 1.008 and should be all the better for it. I'm attempting to kick the coffee Porter now so I can get my Roggen online, and then the funky pale ale will be up next.

In other beer news, the Oro de Maggie appears to be *really* whacked out, with weird, drippy tentacle looking bug induced infection stuff on the top layer there. I couldn't capture it in a photo, it's too small to really get captured on digital for posting. But hey, it's weird. I also threw a bunch of it in a 750mL bottle and tossed in a spoon full of sugar there, with a cap on top, just to see what it'll be like in a week or so carbonated up. I wasn't that particular with sanitation, but I figured, the gravity is already way down and it's so damn infected with *something* that it can't hurt. Stay tuned, true believers.. I'll be accepting applications for a drinking partner for the bottle opening for that in about a week or so. Who's game? :-)

Click that damn Google Ad!
Posted by Mike E. at 8:49 PM No comments: Links to this post 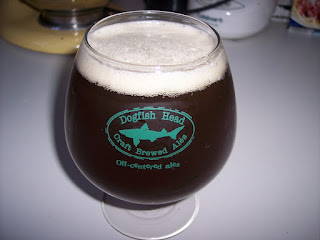 So there on the left is a photo I grabbed of Geoff's Porter.. a sweet Porter, I think he said. I could be wrong. I think I'll just call it a Brown Porter, cause I'm more familiar with that style. Cause it, well, exists. You know. Anyway.

This beer was left in my fridge in a 22oz bomber. As such, I found it only fitting to pour the whole damn thing into a 22oz Dogfish Head mega-snifter and drink the whole stinkin' thing at once. I enjoyed doing so. I poured a medium brown beer into the glass and found a moderate head of foam resting on top, as seen in the pic. It lasted some time up there, maybe two minutes or so. The beer itself was somewhat hazy.. I was sorta lackadaisical on my pour of this bottle conditioned beer, and may have flubbed a bit of yeast in there, so I'll not hold that against Geoff. I get the aroma of malt, and maybe a hint of roastiness as well, but not much. Checking my style guidelines against the notes I took as I drank this, so far, I *should* be detecting a mild roastiness and maybe a bit of caramel or nutty/bready-ness as well.. which I think I could see here. The malt aroma was "soft" and "fluffy", for whatever that means in the world of taste. The book says I should have a clear beer here, but like I said.. I wasn't watching my pour that much as I knew this was gonna be a dark beer. We'll do better next time. I found the bitterness to be right in the middle.. perhaps a bit on the maltier side than bitter, but definitely in the balanced zone. The taste was smooth and creamy on the palate.. easily drinkable. Perhaps that creaminess was a touch of diacetyl, which would be OK per style, but I couldn't detect any of that in the aroma. I found a tiny little ester or three of fruitiness hiding in here as I drank, but not much. Carbonation was right in the ballpark, as it ranges all over the map for this style.

All in all, I'd say this beer was fairly well on the nose. The only thing I didn't get from it was a bit of "stellar". It was a really nice, solid brew.. something you could fall back on any time and have a good drink. I think I'd like to see a it of something else in the center there... maybe a bit of chocolate flavor, or a really mild roast.. something to layer it up a bit and give a hair more complexity, but otherwise, I'd probably not change much else. Really a solid hit right there, Geoff.

I think Geoff needs to throw down with some numbers in the comments section here.. O.G., F.G., ABV, IBU's, Recipe and Hops.. give us an idea of what we're dealing with.

In other news, as you all may or may not know, I've been doing battle with that keg of American Wheat leftover from my New Years party. The damn thing just won't die. Today, I went off the deep end when I heard it gurgling but couldn't do it in.. so I called in a heavy hitter: Frank Aiudi.

I gave Frank two pint glasses and sent him off to the garage.. and almost had to avert my eyes when I saw the death blow coming.. but it came nonetheless. It was inevitable. Frank kicked the keg. It took only a pint and a half of Frank's mighty trigger finger on the pony tap, but the foam burst forth halfway through the second pint glass.. and that was it. She was gone. Expiring in a mighty burst of carbonated froth. Never stood a chance.

So long green-apple-tasting American Wheat.. you put up a hell of a fight! Salute!

Tomorrow, I put the carbonating tap on the third iteration of the Roggen, rack my funky Jolly Pumpkin yeast Pale Ale into a keg, and set my sights on the next keg target.

Keep clickin' my Google Ads link, you cheap scrubs!
Posted by Mike E. at 9:44 PM 4 comments: Links to this post 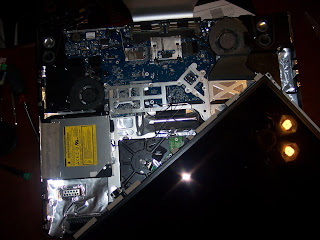 Well, guts of my iMac, anyway. Seems the optical drive (SuperDrive, in Mac -speak...) kicked the bucket this past week. First problem we've had with this thing hardware wise in the time we've owned it. Some guy from a Mac approved site came out for an in house repair. Sa took this pic of the guts of the machine while it was dismembered on the table here. Sheesh!

Here's a beer review for Jody's new IPA. I got a 12oz and a 22oz bottle from him the other day, filled with his new beer gun thingy. He says he loves it. It seemed to have carbonation, too.. so I guess the damn thing even works, to boot. It might be a little low on the carbs side.. but it was his first use of this beer gun, so I'll cut him some slack.

Here's a shot of it in action: 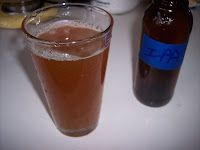 He even used his fancy new labeling machine to put those labels on there all straight and stuff. Beautiful work, Jody! Did you employ that guy from Hillside Brewing to design those ones too, like everyone else in town is doing?

Anyway, The beer poured from the bottle with carbonation, but not much in the way of foam.. kinda petered out really quick. get a whiff of what smells like honey in the initial aroma, but I think that's just the hops in there. Still, smelled of honey for just a bit after the first pour. It's a hazy yellow/orange color... appropriate for a highly hopped IPA. The malt is readily apparent, and is fairly big. Somewhere between a Dogfish 60 and 90 minute. I believe Jody said he was shooting for a 60 minute clone with this. I think it's a bit more malty than 60 minute.. but definitely less than 90 which makes it ever so much more drinkable. And drinkable it is, as this poor little 12oz'er didn't last much more than 5 minutes. Totally delicious stuff right here. A definite treat! Nothing in the way of defects I can taste here.. well, I do see this beer was packaged in a Michelob bottle. Which means, did Jody actually drink a Michelob to get this bottle? Hmm.. some things better left unanswered, I think..

Next time, I'll be workin' a review on Geoff's Porter.. poor guy left a 22oz in my fridge when he came over the other day, and now it's gonna suffer my wrath. In addition, I've still got Ubuntu Linux running on my old crusty laptop here, and it's a heck of an OS. I'm liking it. Way faster than Windows XP was on there.. I'll have to write about that in the future too..

That's all for now. Keep clicking the Google Ads link there to the right, you cheapskates!