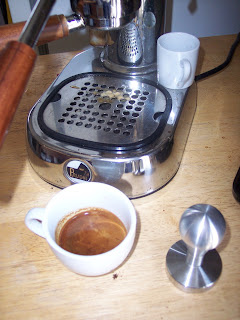 This shot was the bomb. 50/50 mix of a week old dark roasted Panama Peaberry, and a the other half of the same bean, light roasted from just a couple days ago roasting.. 15.5 grams in the basket and a whole lot of mad, phat skillz! Came together like the drink this was meant to be and 10 seconds later, it was gone. But it was really *good*. Just look at the redness in the crema on this thing.. you know that was tasty!

The Boss brought home a cardboard box about 2.5x2.5 feet square that I'm going to use for my chicken brooder when the babies get here in a couple weeks. I'd show you a picture of it, but, well.. it's just a cardboard box, and it's not that exciting. Maybe when I get the heat lamp hooked up and the wood chips and waterers in there I'll take a shot, but if you're gonna get excited about a pic of a cardboard box right now, you need to get out more often. I can tell you I need to get out more often, 'cause yeah, I was excited when I got the cardboard box yesterday and decided it was *perfect*. So, there's your litmus test.. me!

Packaged up the 'Flaming Craftsman' Amber... 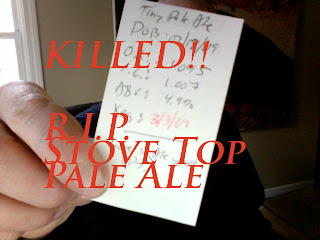 In a hostile beer combat zone such as this one, at Second Shift Brewery, it's really no surprise that we have so many casualties.. but we still feel each and every one, deeply. Late last night, this little guy (the Stove Top Pale Ale) kicked the bucket after putting up a pretty good effort at drinkability. For only ~2-ish gallons, it made it just over a month in battle after being suited up in a keg and put on draft line #2. She'll be missed..

Oh yeah, the '1903 Wheat' crafted on Second Shift's first ever driveway style Big Brew went up on tap line #2 in the above-mentioned dearly departed beer's place... I'll give 'er a week to carb up and report back on the thing.

I'll also say right up front here, just so you're prepared for the tough news when it comes, that the Roggenbier really can't have all that much left in 'er either.. she's marked down as 42 pints from the log keg she's in now, so there can't be much hope for surviving the weekend, I'm afraid.

Speaking of dead kegs, there's a shot of the main suspect now (seen below). Cause with 'er guard down perusing the battle hymn song list, no less. Also in this photo, a shot of the fellow with whom the Rambler v1.2/Flaming Craftsman Amber Ale was created with. As you can see by the strained look on his face, and the death grip he has on that karaoke microphone, the Stove Top pale ale at least put up a good fight and did some damage to one of his assailants before going down for the count! 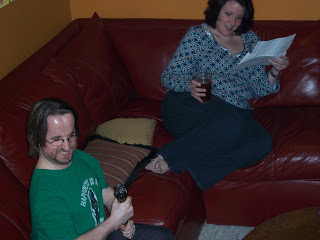 In a follow up to the brew day, Will came back for a beer packaging extravaganza. His half of the bounty was packaged up into 54 brown bottles and sent off for a weeks sleep before coming out to play. Things went off without a hitch during the bottling process and I think he's gonna be good to go with those little guys. There was a fair amount of some sort of hazy/yeast in suspension that irritated me a bit, but hopefully a few days in the fridge after bottle conditioning will flocculate those guys out.

Also of note, last night me and Will opened up a small bottle of a Cantillion Kriek he brought over.. and I'll say, it's damn near as powerfully sour as the regular non-cherry version. It hurt on the first sip, and then evolved quickly into the beer I love so much. Will, on the other hand, made a hell of a strange face, and pulled the rip-cord sooner than later. Something about "churning in my guts" or whatnot. Sorta resembled Jody's intro to big time sour, if memory serves, 'cept Jody claimed he tasted burned rubber instead..
Posted by Mike E. at 12:53 PM No comments: Links to this post