Just got back from vacation.. 7 days, end to end, but felt like a month. That's what happens when you spend a lot of time on the beach.. things just slow to a crawl. We ate well, and I put on 3 lbs as a result. Sweet. This is what I did, mostly, during the week: 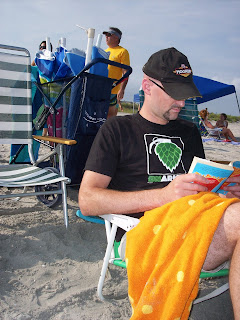 Read. Went through 4 books.. well, 3.5, but I got well into the 4th, so I'll call it OK. As you can see, I'm sportin' my brew gear while away from my brewery. Missed it, yep. I believe I'm brewing with Commando Savvas next week, so we'll be back in the saddle again in just a bit.
Here's what the kids did while on vacation: 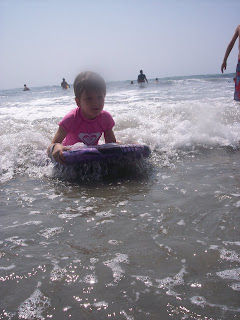 They were really getting the hang of it all by the end of the week. Cessy could really ride  wave in for about 20 feet or so, which is pretty good for being as close to the shore as they have to be.
Here's my beer fridge for the week. Two kegs, both pale ales, but slightly different from one another.. there's also some singles in there from the lower shelf at the homestead, as well as a few comercial examples. And no, that's not my rum. 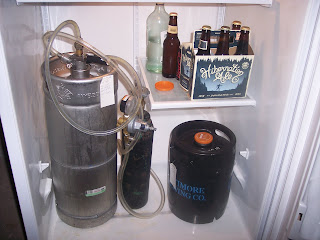 Also hit up the Tun Tavern this year, like last year, but didn't get to hang with the brewer this time. Also, I really missed the Berliner Weisse this year that they had last time around, but the rest of the beers were all really solid. I never have any complaints at that place. Recommended!
Here's a bunch of garden pics I just shot as well..
Mint, gettin' huge.. 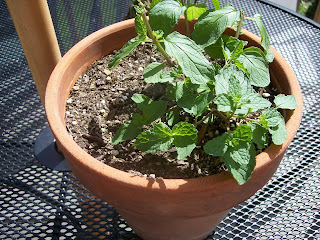 The Global Bucket. This plant has had a hard life so far, but it's still growing fruit. It's ow bent over and growing along the railing, but al the fruits on it are in good shape. We'll keep an eye on it. 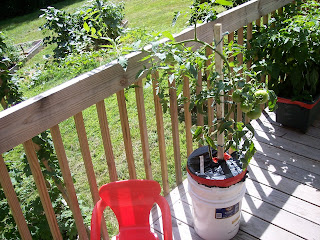 Here' those Habaneros in the Earthbox. Still, clearly out of control. Over 40 peppers per plant. Anyone need any? 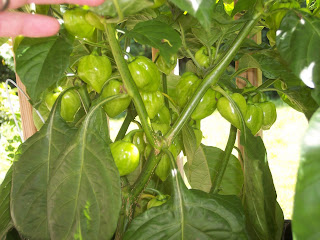 This is my first tomato that's changing color. It's on the right hand side plant that's in the big container. I never thought these guys were gonna make anything worthwhile, since they all keep end rotting.. but maybe we're gona get one after all. 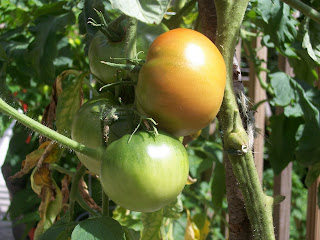 The hops are kinda small this year, but doing well, and the display on this funny trellis is really quite attractive. I like it. 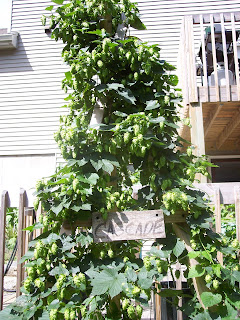 These Roma's in the raised bed I guess are the determinate type after all, and they're all comin' up great now. Got some good red ones on there that I hope to make into sauce pretty soon.. there already was one that fell right off on it's own and it got chopped up and put on a salad for someone already. These are the types I'm gonna grow all on the deck next year in the Global Buckets that are supposed to be really good for sauces. 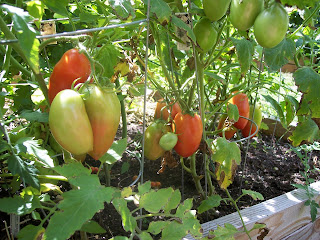 Here's those Turnips that, I dare say, might actually *do* something. They survived the multi disaster stuff that happened a few weeks ago (because whatever was eating stuff didn't wanna eat *this* stuff). Because these guys are so hard core, I will be doing something with them to make them edible. I don't know a thing about turnips yet, but we'll cross that bridge when we get there. There's a couple of surviving green and red lettuce plants in there as well, and those will totally get all ate up. Garden security will be a much higher priority next year, having learned what I did this time around. 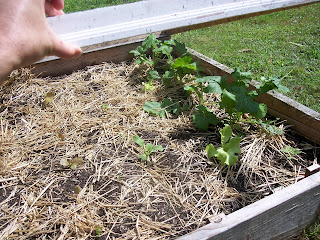 And lastly, a mellon that Barbie dragged off the vine a bit too early. We cut it open anyway, and glad we did, cause it was perfectly fine inside. The kids *loved* it. 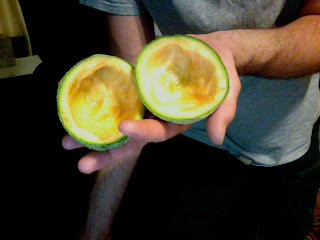